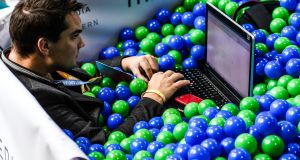 A visitor uses his laptop in the chill out zone during the Re:publica digital conference in Berlin. 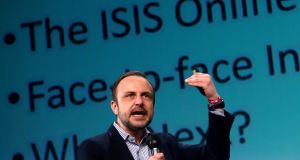 Professor Peter Neumann speaking at the ‘Re:publica’ digital conference in Berlin. “The number of cases where people have been entirely radicalised by the internet is tiny, tiny tiny.” Photograph: Felipe Trueba/EPA

The internet has been blamed as a major tool for radicalising terrorists. But most jihadists are not radicalised through connections they form with others online, Prof Peter Neumann of Kings College London told an audience on Tuesday at Berlin’s digital festival Re:publica.

To research how radicals used the internet, his research team tracked 300 social media accounts of jihadists.

“Who do they follow, who do they consider to be authorities? We were surprised. The most popular accounts were of those not affiliated with Isis.”

The top account followed by the jihadists belonged to a 21-year-old computer scientist in Bangalore who had never been to Syria and just tweeted news that he read online.

“But what he tweeted was so important that for the fighters of Isis, he became the source for news about Isis itself.”

Two other popular accounts belonged to a man in Michigan, and one in Australia.

After Prof Neumann’s group published their research, “the guy in Australia was complaining about us because he was arrested. He was an incredibly influential guy. He convinced hundreds of people to go to Syria. But he’s never been to Syria. That’s what we mean when we talk about an “Isis ecosystem” that extends beyond those actually involved with Isis.

His research group found that face to face interactions were far more important than the internet in radicalising Isis fighters.

He gave as example a young man in Portsmouth called Turab who went to Syria and tweeted frequently, including pictures of the landscape and even, kittens. “Hoping to make you see the beauty of it and come.” he said in one tweet. He also asked people to Skype him so he could encourage them to come to Syria.

“Then we looked deeper and found all the people who joined him were not random people on the internet. They were all from Portsmouth, and were his friends who were active in the same extremist group in the city,” he said.

“If you start connecting the dots, a very large number, probably two thirds, of those in Britain who went to Syria were connected to each other, people who had already known each other,” Prof Neumann said.

“They already had close friendships with fighters, and whenever they went [ to Syria ]there was a big celebration.”

What Prof Neumann saw via the accounts were similar clusters of jihadists everywhere in Europe.

“You’d have relatively small towns and suddenly you have 20 to 30 people going [ to Syria]. That wouldn’t happen if it was just the internet [causing radicalisation]. They went to school with each other, they played football with each other. Ultimately, what decides [whether they go] is not a tweet online but a very profound relationship you’ve had with someone for many years. Of course the internet plays a roll but it is not the internet that causes them to go to become radicalised.”

Prof Neumann says the online landscape is now changing due to the reaction of companies and authorities. Because many of their accounts have been removed from Twitter, jihadists have moved to the smaller network Telegraph.

“What Twitter was before, Telegraph is today. It’s a much smaller audience, but it’s much more difficult to listen to the conversations. They are talking on highly encrypted apps. You can believe it or not, but most European intelligence agencies are not able to listen in to them. It has positives and negatives but one thing for sure, these people haven’t disappeared and it is not necessarily easier to deal with them.”

A second important development is that most of the more recent attacks have been “remote attacks – attacks directed from Syria via private messaging services. They’re getting instructions in real-time on WhatsApp and other platforms. Almost all recent attacks have followed that pattern”.

Prof Neumann says it’s likely terrorists will begin to livestream terrorist attacks. “That should not be a surprise. It’s a [new service]that will be exploited by extremists as well.”

So what can be done? First, we need to think about actions taken against jihadist accounts.

“Content removal doesn’t necessarily cause extremists to go away, it causes them to go somewhere else. That may have negative consequences. It may have a disruptive effect, but it doesn’t solve the problem. Content removal may be justifiable and useful in some cases but can’t be the only solution.”

Social media platforms can be “useful for countering terrorist narratives,” he says.

But the wrong steps may be taken due to misunderstanding the role of the internet in radicalisation.

“The number of cases where people have been entirely radicalised by the internet is tiny, tiny tiny. You have to understand what people are doing offline as well as online.”