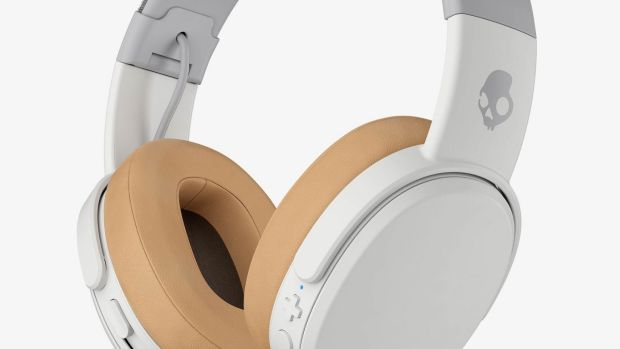 There was a time when bluetooth headphones meant bad battery life, noticeably poorer audio than wired headphones, and regularly interrupted music as the connection dropped.

Thankfully, things have radically improved. They’re still not perfect, of course. Depending on the type you buy – earbuds versus over-ear headphones, budget ones versus the more expensive end of things – you might still get a bit of stuttering, battery life problems or occasional signal drop.

But the Skullcandy Crusher Wireless don’t suffer from any of these issues. That’s not to say they don’t have issues, but the most troublesome ones are not among them.

Skullcandy’s Crusher range is built around one thing: bass. The idea behind the headphones is that you can boost the bass at the swipe of a button, turning it from okay to heavy in an instant.

Designwise, there’s nothing outstanding about the Crusher Wireless. The pair reviewed here were basic black, with comfortably padded earcups and headband. Even after a few hours of wear, they didn’t leave sore spots on my head, which is something that other headphones have managed to do despite claiming to be comfortable. If there was any criticism to make, it’s that they don’t look quite as premium as other headphones – but they don’t look cheap either.

On the right earcup is the power button, plus volume controls. These also double up for controlling your music; you hold the buttons down for three seconds to make them skip forward or backwards. It doesn’t sound like much on paper, but the lack of instantaneous skip is a little off-putting. On other headphones, this has been tackled with touch controls – swipe forward, swipe back – and it feels much more intuitive.

The left cup has the bass slider, plus the stereo jack to turn the headphones into wired, and a charging port.

The bass slider takes things from zero to gut-punchy in one swift move. It can get a bit overpowering, though, and the bass reverberating in your ear was not my favourite experience. That was at full, though; vocals were drowned out by the bass, making it difficult to listen to the audio. About halfway is more comfortable, or a third of the way, if you like your bass a little less vibrating.

It does add something to the audio, even at lower levels. It makes everything seem a bit richer. In saying that, though, even if you never touch the slider, the audio is great – rich and punchy.

The battery on the Crusher Wireless lasts at least two full days – the official count is 40 hours of playback – but that’s if you spent every waking moment listening to music.

In reality, I got more than four days between charges, and that counts the time I forgot to hit pause on the music, and left it playing quietly in my bag before I noticed that my music player was still active on my phone a few hours later. One of the downsides of the design is that you can’t charge the headphones if you want to listen to music using the wired connection at the same time. The two cables don’t fit side by side. It’s a scenario that’s unlikely to trouble too many users, though.

The good: These headphones are comfortable. They don’t pinch your head at all, and there’s enough padding around the earcups to not only cut out a lot of noise, but also to make sure they sit very comfortably on your head.

The sound is good, too, although not quite as developed as more expensive headphones. Take the price into account and you have a decent set of headphones for a good price.

The not-so-good: Noise isolating is not as good as noise cancelling, but that’s reflected in the price. The bass boost feature, while nice, is not an essential here either.

Because they are bluetooth, you have to remember to charge the headphones or face a dead pair. And you can’t fit the charging cable and the stereo cable – if you run out of power – side by side, so if you want to charge, you can’t listen, and vice versa.

The rest: Controls on the earcups are easy to find, so you don’t have to play guessing games when you want to increase or decrease the volume. Trying to skip tracks is less instant, though, as it relies on the same set of controls.

The verdict: Comfortable, good audio and no stuttering; bluetooth headphones that are worth their price.

Prices are on the rise again - how worried should we be?

Inside Business with Ciaran Hancock - How realistic are the post-Covid spending plans? / Northern Ireland trade 46:46

2 US rectifies ‘do not travel’ virus warning for Ireland

4 Bird escooters and bikes set for Irish launch this year

5 Staff from US firm to join DAA at Dublin Airport