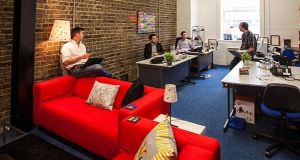 The Guinness Enterprise Centre (GEC), a not-for-profit co-working space located in the Liberties area of Dublin, has won out over 1,300 similar ventures to be named as the world’s top business incubator.

The centre was awarded the title at the World Incubation Summit in Toronto, Canada. The event is the brainchild of UBI Global, a Stockholm-based research and advisory firm that provides matchmaking, ranking, benchmarking, and research services to corporations and business incubation programmes in more than 70 countries.

The Guinness Enterprise Centre, which is managed by the Dublin Business Innovation Centre (Dublin BIC), was recognised at the awards for having “world-class facilities, a supportive start-up ecosystem and a strong culture of community”.

The GEC, which is involved in collaborations with 23 of the top 50 business schools in the world, is the largest single building enterprise centre in Ireland with more than 90 companies located in its start-up hub, and an additional 100 firms co-working from its CoWork@GEC co-working space.

Among the many companies to have availed of supports and initiatives provided by the GEC include Adaptive Mobile, GirlCrew, OpenJaw Technologies, StatCounter and SwiftComply.

Overall, more than 500 people work in the centre, which is also the location for a number of Enterprise Ireland programmes.

“It’s a real honour for the GEC to be named as the top university collaborating global incubator programme in the world,” said its manager Eamonn Sayers.

“Working with universities and third level institutions, not just in Ireland but globally has been an integral part of how the GEC delivers added-value to our companies,” he added.

1 State’s biggest landlord records 30% rise in rental income
2 What will the office market look like after the great remote working experiment?
3 Irish tourism must also help itself to survive the pandemic
4 Facebook agrees Irish wind farm deal with Brookfield
5 ‘Saudi Arabia is where the opportunities will happen in future’
Real news has value SUBSCRIBE