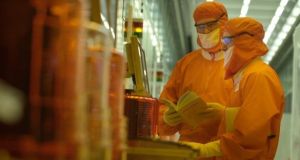 Appeals board gave the plan the go-ahead after concluding that the proposal accords with national, regional and local planning policy

Intel has welcomed a decision to grant planning permission for its proposed new $4 billion (€3.63 billion) manufacturing fabrication facility at its Leixlip plant and said that preliminary work on the project is already underway.

The technology giant said in a statement it was progressing with the early phases of a multi-year construction programme at the site.

“As always, site expansion and the related investment will be taken in stages and are subject to change based on business, economic and other factors,” a spokeswoman for the company said.

Intel, which has invested $15 billion in its Leixlip site, this year marks 30 years in Ireland.

An Bord Pleanála gave the go-ahead for the company’s proposed $4 billion project after finding that the plan would constitute a reasonable and orderly expansion of the existing manufacturing use at the location.

An Bord Pleanála in its decision upheld the recommendation to grant by Senior Planning inspector, Paul Caprani at the end of his 83 page report.

The application is the eighth Intel Leixlip application Mr Reid has objected to since 2012 with six previous applications brought before An Bord Pleanála by Mr Reid.

Mr Reid unsuccessfully opposed the $4 billion first phase of the ‘fab’ plan in 2017 when lodging an objection against the application and then appealing the Council decision to An Bord Pleanála.

Granting of planning permission comes three years after Intel secured permission for the first phase of the ‘fab’ facility valued at $4 billion.

In total, the two planning permissions represent a $8 billion (€7.26 billion) investment which will employ 6,000 construction workers at peak and 1,600 full time jobs on completion.

The projects represent the largest single private investment in the history of the State on one project if given the go-ahead by Intel globally.

Intel, which first established operations in the Republic in 1989, when it opted to locate its European headquarters in Ireland at a former 360-acre stud farm, employs 4,900 people here.

By its estimates, the company claims to contribute €1.08 billion each year to the Irish economy and supports 6,669 full time equivalent jobs.