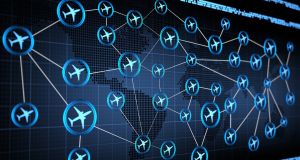 Datalex shares were suspended in Dublin in May as it failed to publish its 2018 results by a regulatory deadline.

Datalex, the travel retail software company hit by an accounting scandal earlier this year, is in mediation with Lufthansa after the German airline moved in September to pull a massive contract to overhaul its digital commerce offering.

“We’re talking to each other. I wouldn’t want to comment too much on it, but we’re happy enough where it’s going,” chief executive Sean Corkery told reporters on Friday, after an extraordinary general meeting (egm) where shareholders approved an emergency loan plan for the company.

Sources said that the talks are being facilitated by a mediator.

When asked whether Datalex is focusing on recovering money from Lufthansa for completed work or is looking to agree a new deal, Mr Corkery said: “All of the above. They haven’t ruled out anything on their side. We haven’t ruled anything out on our side.”

Much of Datalex’s accounting issues relate to its premature booking of service revenue on the Lufthansa project, agreed in 2016, which had gone over budget and missed key deadlines.

Shareholders voted at the egm in Dublin on Friday to accept a further €5 million loan from the company’s largest shareholder, Dermot Desmond, who owns 29.9 per cent of the stock. The businessman’s Tireragh vehicle had already provided €6.14 million of high-cost loans, carrying an annual 10 per cent rate, earlier this year to keep Datalex afloat.

Datalex’s board had warned in a shareholder circular before the egm the company’s “ability to continue to trade could be placed in significant doubt” if they did not back the loan arrangement.

Datalex first alerted the market of suspected accounting irregularities in January, sending its shares tumbling. It subsequently confirmed that revenues and earnings for the first half of last year had been overstated.

Chief financial officer Niall O’Sullivan – who, along with Mr Corkery, is part of a turnaround team hired by Datalex in the wake of the scandal – said the company was “very close” to publishing restated first-half 2018 figures and results for the initial six months of this year.

Mr O’Sullivan said Datalex also expects to appoint new outside auditors before Christmas. Ernst & Young (EY) quit the role in September after it refused to offer an opinion on the company’s 2018 accounts, due to the breakdown in controls, and accounting irregularities.

Datalex shares were suspended in Dublin in May as it failed to publish its 2018 results by a regulatory deadline. The absence of an audit opinion has made it more difficult for the company to secure a lifting of that suspension.

However, Mr Corkery said that the company still expects to sell fresh shares to existing shareholders – through what is known as a rights issue – to raise capital in the first quarter of next year to repay the loans from Mr Desmond.