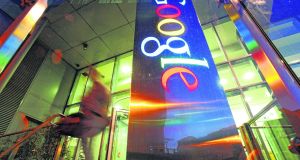 Google Europe International Technology Unlimited paid corporation tax of $255 million, an effective rate which is slightly higher than the statutory rate of 12.5 per cent in the Republic.

Google Europe International Technology Unlimited, which generates revenue from royalty income for selling intellectual property to other group companies, said its turnover rose by $634 million in the year.

The company paid corporation tax of $255 million (€203 million) in the period, an effective rate which is slightly higher than the statutory rate of 12.5 per cent in the Republic.

Those figures come after a Department of Finance report last week noted that the Government has enjoyed a near €6 billion bounce in corporation tax receipts since 2014.

The report also highlighted “the concentrated nature of revenues” with 80 per cent of last year’s €10.4 billion total coming from a relatively small cohort of mainly US multinationals in the pharmaceutical, technology and finance sectors . About 45 per cent of last year’s total came from just 10 companies, understood to include tech giants Google, Apple, Microsoft, Dell and Oracle.

The jump in receipts has been linked to the onshoring of assets here in the wake of a global clampdown on multinational tax avoidance and increased corporate profitability generally.

Google Europe International Technology reduced its intangible assets here during the year from $2.7 billion to $2.1 billion. Given the nature of the company’s business, this is all likely to be comprised of intellectual property.

This entity doesn’t employ any staff, while the directors behind it are supported by staff of other group undertakings.

1 47,000 homes need to be built each year to solve housing crisis, report says
2 Jervis shopping centre takes major tenants to court over rent disputes
3 Hairdressing 7% more expensive in July as prices declined across economy
4 Can Covid free your workplace of bureaucracy?
5 How Argentina and its creditors thrashed out a $65bn deal
Real news has value SUBSCRIBE