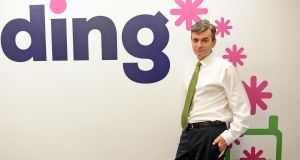 Ding founder Mark Roden, who is gearing the company up for a major expansion in its workforce and services. Photograph: Eric Luke

Ding, the global mobile phone top-up platform founded by Irish entrepreneur Mark Roden, has beefed up its management team including hiring a top human resources executive from Facebook, as it prepares to add 100 new staff by 2021.

Ding’s platform, which lets users around the world transfer mobile phone credit to each other, has also struck a partnership to allow its users buy each other Netflix subscriptions, which will be launched “within weeks”.

Mr Roden said it will also launch a service to pay utility bills on the platform next year.

Accounts provided to The Irish Times for Ezetop, the unlimited company that owns Ding, also show a 9 per cent increase in overall turnover last year to $424 million (€385 million), although this includes top-up transaction values.

Net revenue, the slice of turnover used by Ding as a sales yardstick, rose 10 per cent to $38.3 million. The Dublin-headquartered group, which generates its sales in global emigration hotspots such as the Gulf, files its accounts in dollars.

Its ebitda (earnings before interest, tax, depreciation and amortisation) in 2018 was close to $8 million.

The financial statements also show that shareholders, led by Mr Roden and his wife Nicola Roden (who are majority owners), took a $13.5 million dividend in 2017. There was no corresponding dividend payment for 2018.

Ding was founded in 2006 by Mr Roden, a former EY Entrepreneur of the Year who also helped Denis O’Brien to found Esat Telecom. The company’s services are used by immigrants globally to send small amounts of mobile phone credit to relatives back home as a form of cross-border remittance.

“For a large part of our time, we have been devoted to growing a single service,” said Mr Roden, who added that 300,000 customers use the platform each month.

“We thought: ‘What other services can we give our users?’ What if a worker in Dubai could use the platform to pay his mother’s electricity bill back home in India? What if he could buy his family a Netflix subscription?”

The company, which employs about 220 staff and has offices in nine locations abroad, is gearing up for a major growth spurt in the next two to three years, Mr Roden said.

The company has just hired Fiona Mullan from Facebook, where she was vice-president of international human resources. At Ding, she will assume the role of chief people officer.

Mr Roden, who returned to the business in 2018 after a year off, said he had had an “opportunity to look at it from the outside” and he realised he had to overhaul its management structure to drive growth.

“So we went out and hired people who have grown huge services and large companies before,” he said.

1 Basic income for all: Has the Covid crisis given us a new economic model?
2 Promontoria barred from pursuing doctor over Ulster Bank loan
3 ‘I don’t need to do any of this. . .I don’t actually need to work.’
4 Online shoppers face unwelcome tax surprise
5 Only way is up for Stripe as valuation skyrockets
Real news has value SUBSCRIBE