Drone delivery of medication to Aran Islands a ‘keystone moment’ 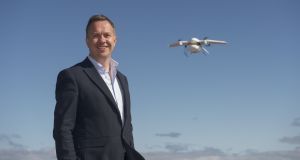 Prof Derek O’Keefe of NUI Galway: ‘We’ve shown it can be done safely with the right professionals.’ Photograph: Andrew Downes/xposure

The flight between Connemara Airport and Inishmore was part of a research project between NUI Galway and its partners. The drone used autonomous beyond-visual-line-of-sight technology to deliver insulin and glucagon and collected a patient blood sample.

The Wingcopter drone is capable of travelling 100km, is roughly the size of a coffee table and can carry up to 6kg. It was connected via Vodafone Ireland’s IoT (internet of things) network, with a satellite back up.

The idea for the project came about in 2017, when project lead Prof Derek O’Keeffe discovered flooding from Hurricane Ophelia meant his diabetes patients were unable to reach his clinic. Similar chaos was caused by Storm Emma, with patients snowed into their homes and in farms, leaving some at risk due to being unable to access the necessary medication.

Prof O’Keeffe, who is a consultant endocrinologist at University Hospital Galway and a professor of Medical Device Technology in NUI Galway, began exploring the possibility of using technology to solve the problem, considering that climate change could make severe weather events more common in the future.

“It’s the whole cycle of care,” Prof O’Keeffe said. “We did it in a highly regulated area of the EU.”

Among the experts drafted in to facilitate the test flight was the founder of drone operations management platform Skytango Steven Flynn, Survey Drones Ireland, German drone company Wingcopter and global healthcare company Novo Nordisk. The test was also supervised by the Irish Aviation Authority. The flight was completed by experienced drone pilots, and locals in the area were alerted to the test.

Although this was a research flight and drone deliveries are still some way off, Prof O’Keeffe said the project proved it could be done safely and within the regulations governing drones that have been laid down by the IAA, which required the drone to be monitored, connected and contactable at all times.

“This is the keystone moment,” Prof O’Keeffe said. “We’ve shown it can be done safely with the right professionals.”