Hands on with the new Samsung Galaxy Note 10

Can Samsung win people over with not one but two new Notes? 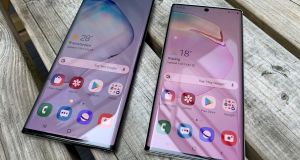 The Samsung Note is a bit of a peculiar beast. On the face of it, it shouldn’t have worked when it was launched in 2011. It was huge compared to other phones for a start, and it had the S Pen, a stylus that eventually proved its worth.

The Note created the category known as the phablet - a term that has thankfully all but died out - and pushed other phone makers into creating devices with bigger and better screens. But in the very beginning, it was an oddity, a giant among diminutive phones. The 5.3 inch screen made it stand out, and all in all, it was closer to a tablet than a phone.

It was a commercial success for Samsung though, and the company has kept churning them out ever since. We’ve had a new Note practically every year, with a few exceptions: the Note 5 never launched here, with Samsung offering the Galaxy Edge 6+ instead. Then there was the disaster that was the Note 7 recall , before Samsung recovered its mojo with the Note 8.

It’s a curious thing, but according to Samsung, Note users are loyal. Even with the Note 7’s issues, there were some owners who defied the recall, with Samsung eventually pushing out software updates that disabled the ohone on certain networks and in some cases drastically reduced the battery life.

So now we’ve come to the Note 10. Can Samsung tap into that loyalty one more time?

Yes, it feels on the large side, but it’s still in the same ballpark as the iPhone Xs Max, if a few millimetres taller. The Note 10 feels more like the regular Galaxy S10+ in size.

There are a few other differences. The Note 10+ gets the better camera, with a quad camera set up to the Note 10’s triple camera. The 10+ also gets the bigger battery, which makes sense, more RAM and a larger capacity option with a 512GB version.

Both get the new S Pen features. Samsung’s smart stylus now supports gestures, which means you can control your camera, for example, by pressing the button on the pen and gesturing.

How does it look?

The Note 10 borrows a few style pointers from the S10 family. There’s the Infinity-O display, which basically means the front facing camera is a hole punched out of the pretty impressive display. The screen stretches almost from edge to edge of the AMOLED display, which is how Samsung has squashed a massive screen into a slim enough phone.

Samsung is offering three colours in each size. For the Note 10+, you can choose from black or what Samsung is calling Aura Glow. It looks like chrome until the light hits it, and then you see different colours show up, depending on the light. It’s hard to describe, but it’s an impressive effect, and it’s almost a shame that you are bound to cram the phone into a protective case and cover it up.

Selected European markets will also be getting a white version of the 10+; The Note 10 gets a pink colour in selected markets.

How is the camera?

Samsung does well on its cameras, as previous versions of the Note and the flagship Galaxy S range has shown in the past. You can expect more of the same - great still photos, impressive video footage and some intelligent camera features. The live focus feature has been extended to the video camera for the latest version of the Note, which makes for some interesting effects. You can drop the background out to black and white for example, leaving the subject in colour, or blur it out to make your subject stand out.

The improvements to sound are also useful, with the sound zoom cutting out background noise and giving better sound. That gets the thumbs up, because video conditions are rarely perfect.

If you are a fan of the Note, you’ll already know about Dex. That is Samsung’s way of bridging the gap between mobile and desktop. This year, Samsung has partnered with Mcirosoft so you can connect your phone with your PC, get notifications on your laptop, enable screen mirroring and receive calls. Another way to make sure you are always connected - that may not necessarily be a good thing.

While the Note 10 and 10+ are great for working, Samsung was also keen to push the phone’s entertainment and leisure credentials. It’s a bit of an allrounder. You can shoot and edit video on the device, with some decent editing tools at your fingertips, and Adobe has some software optimised for the Note 10. It’s like a mini editing studio in your pocket.

It’s no slouch on games either, tackling some power hungry mobile games with ease.

At the preview event, an artist was sketching attendees with the S Pen, which showed just how accurate it was. I never managed anything as good, but the handwriting recognition - limited to about two pages at a time - was reasonably accurate, picking up about 90 per cent of my scrawl accurately.

There are plenty of nice but not essential features on the Note 10. The AR doodling is fun - you can give someone a moustache or crown that follows them around while you are filming. You can also screen record while using picture in picture - handy for people recording tutorials or streaming themselves gaming.