Chris Horn: Is there a smart device that can cook food and clean up afterwards? Not yet, but the smart kitchen industry is moving rapidly 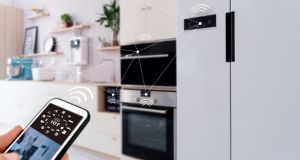 A smart-home operating system. Digital noses can smell overcooked food, but it may be some time before electronic sensors can adjust the amount of cardamom or jasmine to precisely the right level

The Computer History Museum in Mountain View, California, is one of the 128 shrines to technology and science listed around the world in John Graham-Cumming’s wonderful book The Geek Atlas. I have visited several times, drawn back by various exhibitions and talks, and especially by the myriad famous machines such as a reconstructed Babbage Engine, Eniac, Engima, Cray-1, the Apollo-11 guidance system and an Apple-1 complete on its timber mount.

One of the most peculiar exhibits is the Honeywell kitchen computer from 1969. Retailing then at $10,600 (about $75,000 adjusted for inflation in today’s money), the price included a two-week programming course and two cookbooks – and an apron. It could only be programmed in binary by flipping a bank of individual switches on or off. Likewise, its output was displayed in a binary pattern on a row of lit or unlit bulbs. Not surprisingly there is no record of any actually being sold.

Today many kitchen gadgets are available with a built-in processor. Ovens, hobs, dishwashers and laundry machines have had an intrinsic controller for some time. High-end fridges have now become equipped to monitor their content, including built-in cameras to automatically detect expiry dates.

But is there yet a smart device that can do everything for you? Can it prepare the food, cook, and clean up afterwards? Not quite yet, but the smart kitchen industry is innovating rapidly.

Samsung demonstrated its Bot Chef last January. It has two multi-jointed, three-fingered robot arms with sensors and cameras. It can locate food in overhead cupboards, open bottles, prepare food by cutting and dicing, and cook on a hob. It can be updated with new skills such as operating other kitchen appliances.

Although its robotic arms use knife attachments to slice food it ostensibly is completely safe with various sensors to detect human presence. Although not yet on the market, Samsung asserted it intends to make the robot reasonably affordable for middle-income households.

If domestic kitchen robots are not yet ready for the market, there are several attempts to partially or even fully automate commercial kitchens.

Zume Pizza was founded in 2015 to deliver fresh pizzas in the Mountain View area. A large van was equipped with automated ovens and a robotic arm cutter. While the van was being driven to deliver pizza, a GPS sensor was used to control each oven and thus ensure each pizza was freshly cooked and neatly sliced by the robot arm as the van drew up to the delivery point.

But earlier this year, despite an eye-watering $2.25 billion valuation in November 2018 on the back of a $375 million investment by Japan’s SoftBank, Zume Pizza abandoned the pizza market, laid off over 50 per cent of its workforce, and announced a rebranding to focus on automated production for other food companies.

But with the success of the kitchen the customer waiting times grew to 15 minutes. Just last month the company upgraded its technology and rebranded as Infinite Kitchen. It now can prepare 350 takeaway meals per hour from 49 different recipes.

In the California and Florida branches of Caliburger restaurants a robotic arm, affectionately known as Flippy, cooks burgers. Thermal scanners and computer vision sensors are used to automatically monitor the preparation of each burger.

With a demand for high-quality food and low food waste at reasonable consumer prices, it seems likely that technology for fully-automated meal production for takeaways and restaurants – “ghost kitchens” – will continue to be developed over the next few years.

It also would seem likely that affordable home kitchen assistants for the consumer market, such as Samsung’s Bot Chef, will emerge during this decade.

For those challenged by cooking, not least many with special needs, automated fresh food preparation, cooking and cleaning could be life-changing. Nevertheless, for those of us who are physically able to cook there can be a pleasure in culinary art. It is difficult to envisage a robot tasting a roux or a sauce to a perfect consistency and flavour.

Digital noses can already smell overcooked food, but it may be some time before electronic sensors can adjust the amount of cardamom or jasmine to precisely the right level.

For myself, in our perpetually cluttered kitchen with limited work surfaces, what I need is a simple “hands-free” mount for my smart phone – so that I can keep following the recipe.