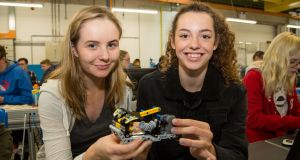 Aideen O’Hagan and Anna Ryan are pictured at an ECubers summer camp at the University of Limerick.

Summer camps designed to encourage young people, particularly young girls, to choose engineering as a career are using Lego software and construction products to promote the “fun” aspects of the profession.

The ECubers summer camps, held at the University of Limerick, puts Lego Technic Sets and Lego Mindstorms at the heart of its mission to “encourage creative and technical skills”.

The ESE Academy was set up by Irish-owned software engineering company SL Controls in conjunction with the University of Limerick.

Mentors on the programme include experienced industrial experts, the university’s Mechatronics students and transition year students.

“Very little has been done to explain to young people - especially young girls - how much engineering has evolved over the last 20 years,” said SL Controls co-founder and chief technology officer Shane Loughlin.

“We want to get young people excited about, and interested in, engineering - and what could be a more fun way to do that than by using Lego.”