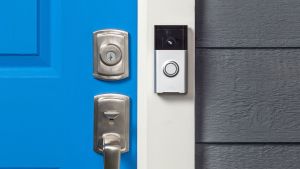 If you want extra eyes on your front door, Ring will do the job.

Where to buy: currys.ie

One of the best things about my brief stint in apartment living was the ability to screen visitors. Anyone who wanted to gain entry to the building had to overcome two obstacles: the intercom on the door and the superior viewpoint that a top floor apartment with a good view of the doorway provided.

The Ring video doorbell has not only brought that level of visitor screening to houses, but it goes one step further by allowing you to answer the door from anywhere – even outside the country. It makes it seem like you’re at home, even if you’re not, which is an extra layer of security.

It is, as the name suggests, a video doorbell. Connect it to your wifi and through Ring’s app you get notifications when someone is ringing your bell or approaching your door, allowing you to tap into the video feed and see who is there. That feature is excellent for visitor screening – no more cold call sales pitches – but also for keeping watch on who is hanging around your home.

The motion settings mean if someone walks up to your door, you get a motion alert, so you can check in immediately. It doesn’t matter where in the world you are; as long as you have an internet connection, you can access the app.

If you can’t check immediately though, Ring automatically captures some video to go along with the alert, so you can see exactly what happened.

Ring is designed to be easy to install, with everything you need in the box for fixing the bell to wood, concrete or stucco. If you have a wired doorbell, you can connect the Ring to that. You are less dependent on your smartphone to get the basic functions out of your doorbell, and you won’t have to recharge the bell periodically.

If you don’t have a wired bell, you can still install Ring, but you’ll need to charge the bell every so often and you’ll need either your smartphone to hear the bell’s chime, or you’ll have to shell out extra for the separate Chime or Chime Pro that plugs in wherever you need it around the home.

In practice, Ring works well. The motion alerts can cover anything from five feet from your doorway to 30 feet, and the camera covers 180 degrees, so you have a decent range of view. Resolution wise, it’s 720p, so you get decent video clips that show people who are are actually recognisable, and the speaker in the bell is loud and clear, but not so much you’ll have complaints from the neighbours.

But back to that motion alert function. We had a security camera once that automatically recorded when there was any movement detected. That meant you ended up with a lot of video clips of tree branches swaying in the wind. The Ring is more sophisticated though, using heat signatures to distinguish between people and things like trees. However, there is one issue: cars. Vehicles not only have motion, they generate heat. That means the cars going down the street will trigger a motion alert.

For most people, it’s easily solved: dial back the motion detection zone. But if you live close to the street, the cars will trigger the motion alerts. You can turn off motion alerts altogether, set them only for certain days and times, or use smart alerts to cut down the number of times you’ll be notified. If you don’t do that, there are a couple of consequences.

First of all, it’s really annoying. Secondly, if you are using the bell wirelessly, you’ll have to charge the bell a bit more often. Ring estimates that you probably have to charge it every 6-12 months, but the wider you have the motion detection zone set, and the more often those sensors are triggered, the shorter that battery life will be.

Other features like Live View, which allows you to activate the camera without a motion or ring alert, will also wind down the battery a little quicker.

But charging the bell isn’t that onerous. The worst part is remembering where you’ve left the tool for removing the anti-theft screws. It charges through micro USB, and the app will remind you when it needs a charge, so it won’t just go dead without warning. As the battery reaches a critical level, various functions will be disabled, like Live View.

If you want extra eyes on your front door, Ring will do the job. The video quality is great, and there is a night vision camera that kicks in in low light.

If you get the motion settings wrong and you are dependent on the battery of Ring, you’ll find you have to charge it a little more often. And those using its wirelessly will be that bit more reliant on their smartphones or face an extra charge for the Chime or Chime Pro.

Ring offers a 30-day trial of its video storage service when you sign up, but it costs €30 a year if you want to save your alert recordings once that trial expires.

4 stars If you want to keep an eye on your home’s comings and goings, but don’t want to install cameras, the Ring is a good middle ground. Even if you do feel a tiny bit like a stalker whenever your family members leave the house.

1 Dracula scenario for Irish economy: second outbreak and no-deal Brexit
2 Ireland faces 'deep downturn' this year and may not rebound until 2024 if there is a second wave
3 ‘The rental situation stops me moving back home’
4 Why are markets booming when a crash is on the way?
5 John FitzGerald: Civil Service expertise key to Government policy
Real news has value SUBSCRIBE