Google has long way to go to placate staff

Cantillon: demands behind walkout over handling of sexual harassment still not met 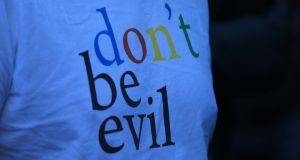 Google walkout on Barrow Street was designed to draw attention to demands from employees, including an end to forced arbitration and more transparency about sexual misconduct. Photograph: Nick Bradshaw

Was it only last week that Google employees marched out of their offices en masse in protest at the company’s handling of sexual harassment claims? A grassroots protest last Thursday saw 20,000 staff members in offices from Silicon Valley to Dublin to Singapore make their feelings clear about Google’s decision to pay Android creator Andy Rubin a multimillion dollar settlement to leave the firm despite the fact there were allegations of sexual misconduct against him. It seems like much longer.

The protest was designed to draw attention to several demands from employees, including an end to forced arbitration and more transparency about how claims of sexual misconduct were handled. Google has decided that those demands are reasonable and worth taking action on, with chief executive Sundar Pichai outlining the company’s response.

A cynic might say that things have worked out nicely for Google. The company has made some sensible changes to its policies, and come out of the whole debacle, while not smelling of roses, looking at the very least like a firm that is actually listening to its employees. A little bit of good press to offset the recent revelations about executive payoffs.

But not so fast. While Google has yielded to its staff on some of the demands, the organisers of the protest say it’s just the start. Google failed to address some of the demands, such as employee representation on the board, and hasn’t really focused too much on how it will tackle systemic racism and other discrimination.

While Google looks like it is making progress, the truth is that the company still has a long way to go before it can consider its issues to be sorted. It has been a tough reckoning for the tech industry and the giants that dominate it. Google may need more than a sticking plaster effort to placate its employees.