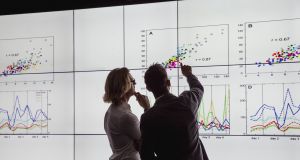 Analytics is set to be big business. Just over a quarter of companies said they spent more than €1 million on analytics this year. Photograph: Getty Images

Data analytics may be an increasingly important tool for Irish businesses, but new research claims difficulty in recruiting the right expertise could hold companies back.

The National Analytics Maturity Study, which was carried out by the Analytics Institute, EY and UCD Smurfit Graduate Business School, found two-thirds of businesses here plan to add to their analytics staff in the next year, but the majority – 79 per cent – said they had difficulty finding people with the right skills.

But the problem may be deeper than the research indicates. EY’s chief data and analytics officer Chris Mazzei said there are two sides to the talent issue. “There is the deep technical talent that you need to do analytics well – those are folks that generally have some type of science, technology, comp science, mathematics background – and there is certainly a shortage in most markets for those folks certainly relative to what the demand is now. The most recent research from EY brings that to life in that in Ireland, over two-thirds of companies are saying they face that type of shortage,” he said.

“The other side which is not getting talked about as much but in my view is actually the bigger issue is upskilling of the core existing workforce. They don’t all need to be experts in data analytics, but they need to be proficient in some level in the job that they have. How we tackle that challenge in many ways is harder than the challenge of just adding what will be a modest number of highly technical staff.”

When it comes to attracting and retaining talent, companies need to approach things a little differently, Mr Mazzei said, helping potential candidates to understand the impact the business has and how they can help influence that. “Don’t be shy,” he said.

Analytics is set to be big business. Just over a quarter of companies surveyed said they spent more than €1 million on analytics this year, with 78 per cent saying they saw the impact analytics had on business strategy and competitiveness, and 62 per cent experiencing a measurable, positive impact on the business. Some 80 per cent said using analytics had changed how they presented products and services to customers. More than two-thirds said they would increase spending on analytics next year.

“As the first significant research into analytics use in the Irish market, the report clearly shows businesses in Ireland see the value in utilising analytics to improve performance and competitiveness,” said Analytics Institute of Ireland chief executive, Lorcan Malone.

The idea that analytics is a niche area is one that is rapidly going out of date, with applications across the board for Irish companies that are competing in an increasingly changing business landscape.

“I think it is relevant for everyone or just about everyone. It’s not just a technology company thing. The use of analytics in all forms of business decision making to increase revenues, reduce cost, manage risk, there is opportunity across the board,” said Mr Mazzei. “I believe generally yes, every business will have a bit of a different context.”

1 How long can Government afford to keep State pension age at 66?
2 Liam Neeson among new investors backing €100m Ireland Impact fund
3 How much will a Covid-19 vaccine cost?
4 How on earth do we the calculate the cost of Level 5 for the Irish economy?
5 Guinness brings out a non-alcoholic version of the black stuff
Real news has value SUBSCRIBE