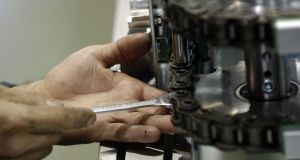 Factory work. Many theories have been put forward as to why the relationship between unemployment and wage inflation appears to have broken down in the wake of the financial crisis. Photograph: Giuseppe Aresu/Bloomberg News

One of the great economic conundrums of the post-crash era is why employment growth hasn’t coincided with a pick-up in wages.

Normally when economies tend towards full employment, wages begin to rise as employers chase a dwindling supply of labour, but instead we’ve had, until recently at least, a low-wage, jobs-rich recovery.

In the UK and the US, which experienced the quickest return to full employment after 2012, wages didn’t respond as expected, remaining almost stagnant for several years.

The disconnect has been linked to the rise of populism in several western countries. In Ireland, Fine Gael got knocked back at the last general election for playing up the recovery when many workers weren’t feeling it in their pockets.

Many theories have been put forward as to why the relationship between unemployment and wage inflation, illustrated by the Phillips curve in traditional economics theory, appears to have broken down in the wake of the financial crisis.

Some link it to digitisation, the gig economy and/or the general shift away from industrial-based economic activities to service-based activities, which is often characterised by low wages.

Now an economic letter, published by the Central Bank, claims to shed light on the issue that’s had economists scratching their heads for several years. The paper, which examined disappointing wage growth in the euro area between 2013 and 2016, suggests that when the spare capacity in the labour market is very high, the relationship breaks down. The link between wages and unemployment only returns when spare capacity is at lower levels.

UK wages are now rising again but only after a decade in the doldrums. Ireland has taken longer to recover from the crash but appears to be bypassing the stagnant wage growth phase seen in other countries with incomes here on the rise as the economy approaches full employment.