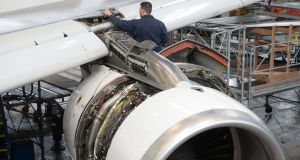 The Irish Aviation Authority confirmed that it is seeing a growing number of applications for aircraft engineers’ licences. Photograph: Alan Betson

UK-based aircraft maintenance engineers are rushing to register with the Republic’s air travel safety watchdog as they fear a no-deal Brexit could hit their ability to work in the European Union.

Aircraft maintenance engineers have to be licensed under EU rules in order to work on aircraft governed by the bloc’s aviation safety regulations. Each member state issues the most common permit, known as a part 66 licence, which is recognised across the EU.

However, holders of UK-issued part 66 licences are rushing to register with the Irish Aviation Authority (IAA) in case a hard Brexit leaves them outside the EU’s regime and thus unable to work outside the UK.

The authority confirmed that it is seeing a growing number of applications for aircraft engineers’ licences. It is understood that a proportion are from British-qualified workers seeking Irish registration as an insurance policy against any fallout from a hard Brexit.

If the UK were to crash out of the bloc without a deal or agreed transition arrangements, it could also end up outside EU aviation treaties and the European Aviation Safety Agency, which sets common safety standards across the union.

Industry figures such as Ryanair chief executive Michael O’Leary have already warned that this could result in no flights between the EU and UK for a period.

It could also prevent UK-licensed engineers from working in EU states, as a number already do. The Republic’s licences would continue to be recognised by other member countries.

The IAA did not give figures for the number of applications for engineers’ licences. Growth in the Republic’s own aviation industry is driving part of the increase.

Companies such as Dublin Aerospace and Eirtech in Dublin, and Lufthansa Technik in Shannon maintain, repair and modify aircraft for airlines and aircraft lessors.