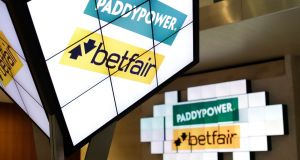 Regulatory and tax bills are mounting up at Irish betting behemoth Paddy Power Betfair. The group’s third-quarter trading statement calculates that the combined impact of the reduced maximum stake in betting machines in the UK, the Republic’s doubling of its turnover tax to 2 per cent and other charges in Australia would have cost the group £115 million (€130.9 million) in earnings this year, had they applied since January 1st.

To put that in context, Paddy Power Betfair expects this year’s earnings to be somewhere between £465 million and £480 million. That figure includes a number of those extra costs but excludes some significant ones.

The biggest is a potential £36 million to £46 million hit from slashing the maximum that punters in British bookies can stake in betting machines to £2 from £100.

Phillip Hammond, UK chancellor, this week gave some relief on this when he announced that the measure would not apply until October 2019. This should cut that £115 million earnings hit by about £27 million to £34 million next year.

On the other hand, Minister for Finance Paschal Donohoe’s decision to double the tax on betting turnover in the Republic to 2 per cent from 1 per cent applies from January 1st.

That would have cut earnings by £20 million this year, and will presumably result in a similar reduction in 2019. The UK is also boosting betting duty next year, at a likely cost of £15 million.

So, while there will be some delay before Paddy Power Betfair feels the full bite of the new regulatory costs, they will continue to grow next year. Those expenses will increase as the company spends money on expanding in the US. Presumably shareholders hope this new market starts paying off as costs in the older ones grow.