Cantillon: Despite outcry from small bookies, Government under pressure to clamp down 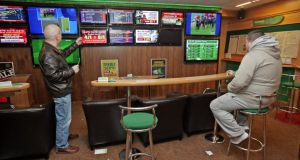 A report commissioned by the Irish Bookmakers Association says the 2 per cent duty would place 400 low-turnover shops at risk, with a negative exchequer impact of €35 million. Photograph: Eric Luke/The Irish Times

These are difficult times for bookmakers on both sides of the Irish Sea. In October, Minister for Finance Paschal Donohoe doubled the betting duty to 2 per cent, and increased its take on the commission earned by betting intermediaries or exchanges from 15 to 25 per cent.

This led to an outcry from independent bookmakers, who say they will be put out of business.

Fortunately, bookmakers don’t offer FOBTs in Ireland, but gambling is a major problem in this country

At present, people can bet up to £100 (€114) every 20 seconds on electronic casino games such as roulette. A new maximum stake of £2 every 20 seconds was to have been introduced next April but has been pushed back to October. Crouch argued that this could have devastating social consequences, with some of those addicted to gambling taking their own lives.

Fixed-odds betting terminals (FOBTs) are big business, generating £1.8 billion (€2.1 billion) in revenue annually, according to the UK’s Gambling Commission. Fortunately, bookmakers don’t offer FOBTs in Ireland, but gambling is a major problem in this country. Like alcoholism, it is often hiding in the shadows and can have many of the same devastating impacts on families and communities.

In the wake of the budget, the Irish Bookmakers Association hired DCU academic Anthony Foley, who has been writing reports on behalf of the alcohol industry for many years, to estimate the economic impact of the duty increase on the industry.

His report predicts that the duty would place 400 low-turnover shops at risk, with a negative exchequer impact of €35 million. Another reason for their demise might be the continued migration of punters to the web, and structural changes within the industry.

Either way, bookmakers face an uncertain future. What does seem certain is that gambling is going to be an increasing focus in the years ahead for policy makers, as has been the case for the alcohol industry over the past decade or so. The pressure on politicians to impose change for the greater good will only increase. And that will be a much bigger threat to the viability of bookmakers.