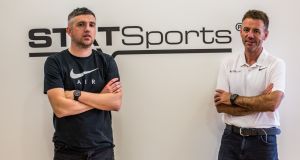 Irish sports tech company StatSports has scored yet again with a multimillion euro deal with the Chinese Football Association for its performance monitoring technology.

The deal, the third the company has secured with a national soccer federation in the past six months, will see StatSports providing its wearable player tracking system to all national teams within the association.

The Chinese Football Association has responsibility for the national men’s, women’s and youth teams for soccer, beach soccer and futsal. A plan is in place to have 50 million players, 70,000 pitches and 50,000 coaches by 2020.

Newry-based Stat Sports already has a significant number of customers in China including Guangzhou Evergrande Taobao FC, who have won the Chinese Super League title for the past seven years in a row.

The Chinese deal comes in the same year that the company secured a five-year contract valued at £1 billion (€1.14 billion) with the US Soccer Federation in what is believed to be the biggest contract ever to be signed in the elite sports wearables market.

It followed this up a month later with a contract to supply its monitoring devices to the Brazilian national football squad after persuading the federation there to switch providers from Australian rival Catapult Sport.

StatSports, which was founded by Sean O’Connor and Alan Clarke in 2007, also supplies its technology to a number of leading European soccer clubs including Liverpool, Arsenal, Manchester City, Manchester United, Barcelona and Juventus.

In addition, the company’s APEX monitoring devices are used by the Irish Rugby Football Union, and all four Irish rugby provinces, as well as teams playing GAA, American football, hockey and basketball.

The devices, which are worn in vests, measure and analyses player performance in real-time to provide instant feedback to coaching staff on metrics such as distance and speed, as well as levels of fatigue and injury risk.

Statsports, which recently announced plans to create close to 240 jobs in Newry, launched a consumer friendly version of its APEX technology in August, allowing amateur athletes to use the same technology as that worn by soccer stars Ronaldo and Neymar to track their performance.

1 FinCEN Files: Dublin business features in leak of US treasury documents
2 Chris Johns: We’re in for a triple whammy of Covid, Brexit and the US elections
3 The FinCEN files: Unchecked by global banks, dirty cash destroys dreams and lives
4 A look at Elon Musk’s track record ahead of Tesla’s ‘battery day’
5 Aldi empire wracked by family feud
Real news has value SUBSCRIBE