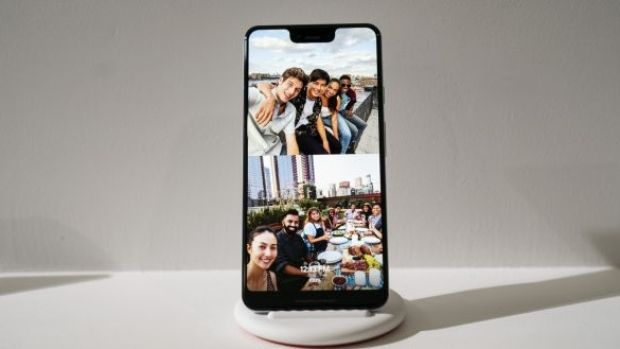 We are spoiled for choice when it comes to Android smartphones. Google has thrown another one into the mix with the Pixel 3 XL, the supersized version of Google’s smartphone. It also happens to be the first of the Pixel phones officially going on sale in Ireland.

But the Pixel 3 XL comes with a supersized price tag, following the trend for recent electronic devices to charge the equivalent of a hefty chunk of a mortgage payment for a device that will be replaced with a newer model in a year.

So is it worth it? Aesthetically, the Pixel 3 looks very similar from the front to most of the standard smartphones: flat rectangle. If you are a fan of bigger phones, you are in luck: the Google Pixel 3 XL is similar in size to the iPhone Xs Max. There’s a glass back with a two-tone effect, and a choice of three colours – black, white and a blush pink. At this point, though, I’ve pretty much forgotten what it looks like because, predictably, it has been in a case since I got it. I’m not willing to test the strength of that glass back.

Speaking of the back, there’s a fingerprint reader there, placed where your finger can actually naturally reach. But the one thing that’s missing? The headphone jack. The Pixel 3 XL has ditched the 3.5mm jack in favour of forcing us all towards using bluetooth headphones or USB-C connections.

The QHD+ OLED display is 6.3 inches, which makes it a fraction smaller than the iPhone Xs Max. It’s a close-run thing, though, and it’s unlikely you’ll miss that tiny bit of screen. What you will notice is the bezel on the bottom of the screen. Where the iPhone Xs Max screen goes almost to the edge of the case, the Pixel XL 3 has a noticeable bezel on the bottom. It means less display in essentially a similarly sized package. That is to accommodate one of the phone’s dual speakers, which is located in that bottom bezel. At the top of the screen, you’ll see the notch has crept into Google’s design. Like Apple and Huawei, the Pixel 3 XL unashamedly sports its notch, making room for its dual front-facing camera.

Speaking of the camera, the Pixel 3 XL’s is excellent. While it can’t rival Huawei’s Mate 20 Pro in terms of low-light shots, the 12-megapixel rear camera stands up well in most shooting conditions. There are preset modes easily accessible – panorama and portrait mode are on the main camera screen, along with the video option – with extras such as slow motion video, a 360 photosphere feature and an AR mode that allows you to drop everything from Iron Man and Star Wars characters to puppies and walking food into your frame so you can take photos. A photobooth mode will take photos as soon as the camera detects a smile – or a grimace, as long as you are baring your teeth.

The two front-facing cameras – both 8 megapixels in resolution – have you covered for selfies. The wide-angle lens comes with f2.2 aperture, and the telephoto lens has an aperture of f1.8 – more light, better photographs, better selfies.

On the video side of things, you can crank it up to 4K at 30 frames per second on the rear camera, but the 1080p footage is great quality and the video stabilisation helps keep things steady. The front-facing camera goes up to 1080p too.

There are some interesting features on the phone. There’s a new digital wellbeing beta feature to help you manage your screen time and the general impact your phone has on your life. Take Wind Down, for example. If you enable it, it serves as a reminder that it’s time to put down the device and get ready for bed. Not only do you get the amber-tinted screen to counteract blue light, but the colour drains from the screen to give you the hint that it’s time for bed. Do Not Disturb is switched on to cut out any unnecessary notifications.

You can turn your phone to do not disturb by flipping it over and placing it face down. It’s a small thing, but it’s a reminder that phones don’t need to be a feature of every waking moment.

The good The camera is excellent, battery life is decent, and if the notch doesn’t bother you, the screen is great.

The not-so-good No expandable storage means you’ll have to make do with your choice of 64GB or 128GB. If you take a lot of 4K video or high-quality photos and want to keep them on your phone, you will eat into it quickly enough.

The rest On the inside, the Pixel XL 3 has a Snapdragon 845 chip, with 4GB of RAM. It also has wireless charging and squeeze gestures – you can simply squeeze the phone to activate the assistant or silence alarms on your phone. Perfect for early mornings, then.

The verdict The Google Pixel 3XL ticks the right boxes – if you don’t mind screen notches.

Dublin football team will not face sanctions for Covid-19 breaches

2 Mixed messages over tax liability on inheritance from my aunt