Pitched as fun feature by likes of Facebook, this tech clearly has a more sinister side 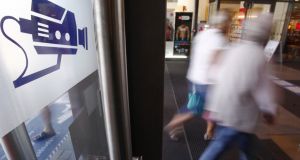 Passengers walk by a security sign warning them of a face recognition area at the Suedkreuz train station in Berlin, Germany. Photograph: Getty Images

German police have deployed the first facial-recognition cameras at a main railway station in Berlin this week, testing new technology that could help track and arrest crime and terrorism suspects.

While the move may be understandable in the context of recent attacks, it does raise major privacy issues, not least in Germany where there is an historic precedent for concerns over Big Brother snooping. The East German Stasi would have dreamed of such technical capabilities in their day.

So far facial recognition technology has been pitched by the likes of Facebook and Google as a fun feature to help identify friends in photos. But it clearly has a more sinister side as well.

It’s not too far-fetched to imagine an Orwellian future where next up will be an app that lets you point your smartphone at someone and it will be able to identify them on the spot. Or given the widespread use of cameras in public locations – along with the potential for drones – that your every public move will be able to be tracked and followed.

Two strands of technology are driving the development of facial recognition software. The first is the computer’s ability to analyse a face. Admittedly this is still an imperfect science, but it’s getting better fast. The other element is to match the face to identities via the millions of photos uploaded on social networks.

As with all technology developments, the key is in assessing the gatekeepers and our trust in the authorities who will administer the technology.

In Germany, the system is being rolled out supposedly to prevent future terrorist attacks. In other less democratic states the same systems could be applied to weed out political dissidents or crack down on those who don’t follow strict religious or social codes.

Authorities in Germany say it is just a trial and the footage of the passengers visiting the station will be deleted. Yet legislators have been slow to react to the advent of more facial recognition technology. For all the fun features that firms like Facebook and Google will suggest can be built upon such developments, it’s worth considering the significant data privacy risks as well.