Net Results: In a world without smartphones, websites began rolling coverage 20 years ago 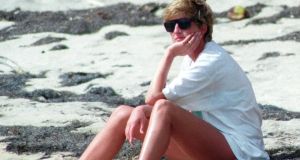 Princess Diana. Her death in a car crash in Paris 20 years ago was the first major news event in which online coverage played a significant part. Photograph: Mark Cardwell

Princess Diana is back in the news. The collective media have already turned up the volume of coverage as the 20-year anniversary approaches of her death in a Paris car crash on August 31st, 1997.

I hear your weary sigh. I’ll bet you can hardly wait for this month of examination to unfold. Me neither.

But one element is worth a retrospective glance. Forgotten now, from our two-decade distance, is that the crash was the first major news event in which online coverage played a significant part.

Nowadays, hearing of a major breaking news story – especially one that seemed difficult to believe, given its tabloid radioactivity – the average person would go online to search for confirming facts and details.

But in 1997, less than 10 per cent of the Irish population was online.

However, I had a home account from Irish internet service provider Indigo at the time. I remember turning on the radio early that Sunday morning in 1997, and hearing the news today, oh boy.

Because the story broke early on a Sunday, normal news coverage was especially restricted. In Ireland, the Sunday papers were already long off the presses. And, we only ever got the early editions of the UK newspapers here, as they were sent over after being printed on Saturday, to be available from newsagents by Sunday morning.

Sunday radio and television included far less news coverage than was the norm for weekdays, and shows were generally of a light entertainment bent.

So I went looking for detail, and confirmation, online. But remember, this was the anorexic internet world of 1997. Most newspapers with a web presence had rudimentary websites that remained, in retrospect, astonishingly static, once a selection of stories for the day were posted. Stories were rarely updated to encompass additional information.

Online played to its unique strengths in being able to post timelines, archive stories, images and videos

On that Sunday, as this major story expanded, nothing online approached what we’d expect in the breakneck, breaking news updates of today.

According to Stuart Allan in his book Online News: Journalism and the Internet, major online news sites of the time had detailed stories up by the time Diana’s death was officially confirmed.

I’m proud to say The Irish Times website was one of the few to carry regular updates throughout that day. Its small team of online reporters got a flavour of the era of breaking news.

Online also played to its unique strengths in being able to post timelines, archive stories, bulletin board discussions, images, videos and links to associated information, such as websites of charities Diana supported.

Many people tend to think of the September 11th, 2001, terrorist attacks on the Twin Towers in New York as the first big news story to unfold online, especially due to the fact that onlookers and their cameraphones or digital cameras documented so much of the ongoing horror on video and in pictures that could be posted and shared swiftly.

And there’s no doubt that, during the 9/11 attacks, the important role of the “citizen journalist” became obvious. Mainstream media could no longer sniffily dismiss the importance of such work coming from people on the ground at the time of events.

And yes, that low-resolution cameraphone image or jerky dark video might not be of typical print or broadcast quality but they captured, with sometimes stunning immediacy, what was happening on the ground.

Notably, onlooker documentation of this sort was missing in Paris in 1997 – imagine how different the same event would be if it had occurred in 2017, or even 2007.

But still: Diana’s sad death on that Sunday in 1997 was an indication of where online would transform media – and the people’s – coverage. What could be found online at the time may have been limited in today’s terms, but it was far more than what would come from traditional sources for many hours.

In addition, what became a monumental story exposed the existing weaknesses of online coverage, and the laggard mindset of much of traditional media to this new medium. Posting a selection of static stories didn’t cut it. Nor did leaving a website unstaffed on weekends or off-hours.

Arguably, we’ve swung too much in the opposite direction, demolishing an appetite for serious investigation, long reads and careful coverage in the rush to be first online with any unverified snippet of breaking news.

Yet – as this past, crazy week of nonstop Trump-related news shows – when things are happening fast (and despite all the “fake news” palaver), online is the news format that helps us keep pace with and better understand a mad-dash world.