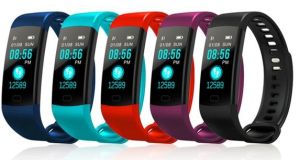 Activity trackers for children aren’t a new idea. Garmin and Fitbit both have devices aimed at a younger age group, although they can be almost as expensive as an adult fitness band. If you don’t want to risk your child with a pricier band, there are plenty of decent fitness trackers out there that won’t hurt your pocket. The Fourfit Mini 2 looks similar to a Fitbit, with a small display in a silicon band. This one comes with a colour screen though, and while aimed at older children – age 10 and up, according to Fourfit’s own site – you could get away with also using it as an adult fitness tracker too. There are some features aimed at adults, such as blood pressure monitoring, but sleep tracking, activity monitoring and smart alarms will all find some use among younger users. It also includes heart rate monitoring.

So how does the Fourfit Mini 2 do as an activity tracker? For the price, it’s not bad, and there are some design choices that may work in your favour.

For example, the charger is hidden under one side of the band so there are no cables to carry. You simply pop off the top half off the strap and plug the USB stub directly into a plug. A full charge will take about two hours.

I say “simply” but it wasn’t as simple as it sounds. There is no way, for example, this strap will accidentally come loose while you are wearing it. I had to wrench the strap to get it free, and the first attempt actually popped off part of the screen (which was quickly fixed, so the Fourfit gets points for not disintegrating at the first hurdle). Once you get the strap off though – and get the connector the right way around – it’s all fairly straightforward.

Getting it set up is a little more complex. The accompanying app, LeFun Health, is not really as child-friendly as rival trackers. This is an adult-focused app, and it shows. It isn’t all that intuitive either. Perhaps I’m used to a degree of hand holding when it comes to activity trackers, but I had to hunt for the option to connect the band to the app.

That is just a bit of software finessing though. The band itself, for the price, is quite good. A small circle at the base of the screen is your way to navigate the menus: tap to scroll through, hold to select. That means there is no touch screen to accidentally select – good for smaller hands.

Syncing with your phone can take place once a day or once a week, if you want.The data is stored on the band until you transfer it over, so you can keep full control of the band and its data.

The tracker itself feels a bit big though, especially for a younger age group. Even on my wrist it felt a bit long .

You get what you pay for, and at under €25, you don’t expect the build quality of a Fitbit for the fraction of the price. Taking into account the extras it offers, the Fourfit Mini 2 is a budget friendly option for children – and adults.

1 Hurrah for the companies giving staff more time off
2 RTÉ to seek 70 voluntary redundancies as ‘large costs’ beckon in 2021
3 Covid-19 will worsen shortage of accountants, says CPA Ireland
4 ‘We lost money on our planned wedding in Spain. Covid saw to that’
5 Some Irish money market funds came close to danger in March
Real news has value SUBSCRIBE