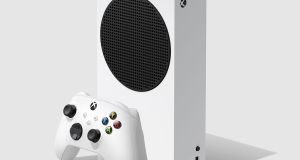 Microsoft is set to add not one but two new consoles to its next-gen line-up. Can’t quite stretch to the Xbox Series X? Then take a look at its more affordable sibling. The Xbox Series S is not only smaller in price, but it will also hog less room in your home gaming set-up. The device is expected to have 4K streaming, 4K upscaling, and a 512GB solid-state storage drive. You’ll need that space, though, because the Series S is all digital, which means downloads only. But then, when was the last time you bought a physical game? microsoft.com

1 Google tells workers to return to country where they are employed
2 Recurring Covid restrictions will kill off many viable businesses
3 Sean Quinn stunned at rebranding of Quinn Industrial Holdings
4 Pension problems: Workers ‘leaving free money on the table’
5 Will tracker mortgage be at risk if Ulster Bank closes?
Real news has value SUBSCRIBE