Rise in profits and revenues for Paypal’s Irish subsidiary 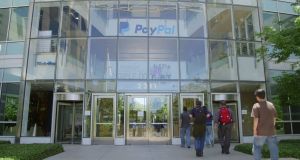 This compares to profits of €23.2 million a year earlier for Blanchardstown -headquartered PayPal Europe Services, a subsidiary that employs more than 2,400 people.

Founded in 1998, PayPal enables individuals and businesses to send and receive payments online. It claims 300 million consumers and merchants in more than 200 markets globally. The company, which employs 23,200 people, had revenues of $17.7 billion last year.

PayPal first opened an operations centre in the Republic in 2003 with just 25 employees. Newly filed accounts show it employed 2,437 people locally last year, of which 1,296 were in customer support and a further 1,018 in general and admin roles.

Employee costs rose to €136.6 million last year from €126.6 million, despite a slight decline in staff numbers.

The Irish subsidiary has received capital contributions of €8.4 million from its parent since it was first established.

1 Guinness brings out a non-alcoholic version of the black stuff
2 How long can Government afford to keep State pension age at 66?
3 Don’t worry about the deficit – the lockdown risk is to jobs
4 Google's incredible power is the result of decades of regulatory failure
5 Half of businesses plan to freeze pay next year
Real news has value SUBSCRIBE