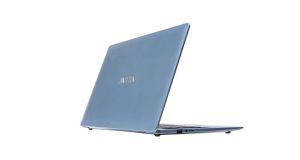 The Ryzen 3 powered device comes with 4GB of RAM, a 14-inch screen and a solid state drive, wrapped up in a brushed metal effect case.

When it comes to laptops, bigger isn't always better, and that goes for specs as well as physical size.

Buying a top end laptop for occasional, non-taxing use seems a little bit of overkill, spending money that could be used elsewhere. The Avita Pura laptop is a budget-friendly device that will handle schoolwork or basic tasks without trouble.

The Ryzen 3 powered device comes with 4GB of RAM, a 14-inch screen and a solid state drive, wrapped up in a brushed metal effect case. Pitched at the Chromebook end of the market, the Pura Avita has Windows 10, but it comes with S mode, which only allows you to install apps from the Microsoft Store rather than give you free reign with anything you can find online.

While that may seem restrictive, it can also be a good thing for parents who want to keep a closer handle on their child’s use of technology. The restriction can also make it a more secure alternative to a cheap Windows laptop with regular Windows 10 on it; if you can’t install anything in the wild, so to speak, you can’t install viruses and other malware either. S Mode also runs faster on budget devices

The Pura proves that budget doesn’t have to look cheap. The version we got for review was in a pink case that, although it looks like brushed metal, actually turned out to be plastic. It’s a good effect though, so you get the lightness of the plastic case with the looks of a more premium laptop.

The Avita has a decent battery life too, at seven hours. It won’t last a full day away from power, but it will keep you going for extended sessions in front of the screen.

The Avita Pura is easy on the wallet and will handle most day-to-day tasks.