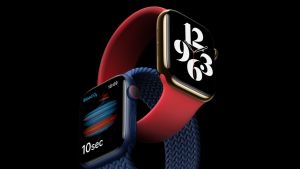 The Series 6 keeps the Series 5’s always-on display, but it makes it brighter for use in strong sunlight

If you haven’t been following Apple’s evolution of its smartwatch since 2015, it might be difficult to see what the fuss is about. It can be hard to tell the Series 1 from the Series 6, unless you know what you’re looking for.

But there are differences, and ones that are worth paying for. There have been changes to design, with the Series 5 bringing in a new size and a new always-on display. More subtle changes are the sensors, with the Apple Watch able to perform ECGs, monitor for low and high heart rate, fall detection, and a compass to help you when you are out on hikes.

The Series 6 makes a couple of other changes. The biggest is the addition of the blood oxygen sensor, which will measure the oxygen level in your blood throughout the day. It might seem like overkill outside of the current pandemic, but it can be an important indicator of your overall health. Add to that the potential for managing chronic conditions – Apple is already starting studies on the use of wearables in the management of asthma, for example – and you might see the capability become more useful in the future.

There is a separate app on the Watch that you can take a quick read of your blood oxygen level, but you can also set it to monitor throughout the day and night, taking measurements while you sleep and logging them in the Apple Health app. If you decide to take a measurement yourself, you need to keep your arm still over 15 seconds – harder than you think – and remember to breathe, of course.

If you already have the Series 5, the upgrade to the Series 6 is not enough of a jump to justify shelling out another few hundred euro on a smartwatch, not even for a blood oxygen sensor. But for older Watch owners – Series 4 and older – there are some things that are worth checking out, even if the idea of monitoring your blood’s oxygen levels holds no appeal for you.

The Series 6 keeps the Series 5’s always-on display, but it makes it brighter for use in strong sunlight. There’s no noticeable impact on battery life from my experience, but there is a noticeable difference in how visible your chosen watch face is. The idea of having a blank screen on your watch just seems odd now, given that the basic function of a smartwatch is, well, a watch.

If you are a fan of hiking, then the always-on altimeter built into the watch will come in handy. Now you can get information on how high you’ve climbed in real time; the Series 5 had an altimeter but that up-to-the-minute data wasn’t possible.

There is more – an updated chip that makes it more powerful than the Series 5 by about 20 per cent, for example, and U1 Ultrawideband support, which improves spatial awareness. In the iPhone 11, for example, it is used to more accurately pinpoint potential wireless AirDrop targets. And while you don’t get any extra out of the battery – about 18 hours from a full charge – the battery in the Series 6 charges a lot faster than the previous models. I usually had to charge once a day, but with sleep tracking now available in WatchOS 7, I was wearing the watch all night and charging during the day while sitting at my desk.

There have been some aesthetic changes too. While the device is essentially the same size as the Series 5, you can now get the Watch in a blue or red case, as well as the steel or gold version.

New watches mean new bands, and the Series 6 is no exception. This time it’s the single loop, a stretchy silicone or braided band that means no catches or buckles, and less chance of losing it. The price tag for the braided loop is steep though, at almost €98, and you’ll need to gauge the size accurately unless you want to return an entire Apple Watch package.

The addition of the blood oxygen sensor brings new capabilities to the Apple Watch, and puts it on a level playing field with rivals from Fitbit and Huawei. You may not see the need for it right now, but it can be used as part of an overall view of your health.

The faster charging for the battery is welcomed, making it much more realistic to use the watch as a sleep tracker.

No improvement in battery life puts the Apple Watch at a disadvantage when rivals are really working on this side of things. Still, you get a full day from the Apple Watch, depending on what you are doing with it.

The move to an always-on altimeter is useful for hikers and climbers, and the addition of new colours broadens the aesthetic appeal of the watch.

Subtle changes for the Series 6, but worth the upgrade for those moving from a Series 4 or older device.

1 Businesses call for more supports amid ‘devastating’ restrictions
2 Ryanair and Eir the worst for customer service during Covid crisis
3 Irish elearning company LearnUpon closes €47.4 million investment
4 What to consider if older person or loved one needs care at home
5 ‘Essential’ retailers risk a firestorm if they exploit the closure of the ‘non-essential’
Real news has value SUBSCRIBE