Fitbit’s new Versa is smaller than the Ionic, more stylish than the Blaze 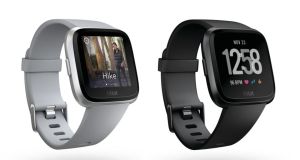 If you have small wrists, or just prefer your watches a little slimmer, Fitbit’s new smartwatch may be what you need. The Versa is smaller than the company’s Ionic smartwatch and more stylish than the Blaze. It touts an on-device health dashboard with Fitbit OS 2.0, quick replies for Android, and some applications and tracking aimed at parents and women’s health. But what you need to know is that it’s not too bulky, won’t need charging every day and, at €199.95, won’t be as expensive as some other smartwatches, Ionic included. It has about four days of battery life, which is enough to mean you won’t be chained to your charging cables too often. It goes on sale in April; fitbit.com.