Tech Review: if you want a smartphone that offers something extra, this is a good bet 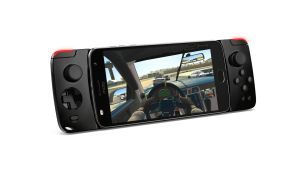 Have you got phone fatigue yet? There are so many phones hitting the market at the moment it wouldn’t be surprising. They’re mostly offering the same thing: great camera, big screens, fast performance. But, occasionally, there is one that finds a unique selling point. For the Moto Z2 Play, that’s its mods.

Mods, in this instance, are snap-on accessories that clip to the back of the phone. And not in a weird Frankenstein way; mods are part of the phone. The base part of the handset is a metal case, with a 5.5 inch screen on the front and a weird sort of flat back with a protruding camera bump.

However, on to that back plate you can snap on everything from a simple case – think Xpress-on covers from the old Nokia days – to a camera accessory that adds 10x optical zoom, to a game pad that turns your phone into a handheld gaming console with proper controls. They clip-on with strong magnets – to remove them you need to pry it apart – and are immediately recognised by the phone. The Turbo Power Pack, for example, will give you options of boosting your phone’s power quickly or simply topping the battery up every time it falls below 80 per cent.

Aside from the mods, the Z2 Play has the standard features you’d expect on a mid-range smartphone. It has a 12 megapixel camera on the rear, and an 8 megapixel front-facing camera. The main camera can be switched into “pro” mode, giving you more control over the white balance, ISO and so on. In good light, both cameras perform well; in lower light things get a bit more challenging. The rear camera’s photographs seemed a bit soft and grainy, which is not great, considering other phones in a similar price bracket offer better performance.

There are biometrics included too. On the front of the device, there is a fingerprint sensor on the front underneath the screen. Out of the box, it doesn’t really do much else, which is annoying. You try to treat it like a home button but it’s not – the home button is on screen. But do a bit of digging through the menus and you’ll figure out that you can set up one-button navigation. That turns your fingerprint sensor into the only thing you need to navigate your way around the phone; it’s a back button, a way to access multitasking and a home button.

There are other gesture-based controls that you can enable or disable from the same menu, from karate chopping the phone to turn the torch on and off to flipping it face down to activate “do not disturb” mode on the phone.

Battery life on the phone is decent. The Z2 Play comes with a 3,000 mAh battery, which lasted most of the day. But if you need extra battery life, one of the mods is a 3490mAh battery pack. Yes, it adds a bit of extra weight and bulk to the phone, but if you are heading to a place where you won’t have access to a power source for a while, you’ll suck up the extra bulk.

The unique selling point for the Z2 Play is the mods. My favourite was the battery pack, because it more than doubles the life of the phone. But the Hasselblad camera back looks like it could be a close second. You can also get a projector accessory, or add wireless charging. It’s easy to set them up, and the magnets are strong enough that there isn’t really much of a danger that the accessories will detach.

Low light images are not the greatest – slightly grainy and soft when compared with other more expensive phones. And the screen had a weird habit of activating for no reason – all you have to do sometimes is look in its general direction and it lights up with the lock screen.

The mods available include a gamepad, which comes free with the phone as part of a promotion with Three Ireland next month, a Hasselblad camera back, a speaker, a projector, wireless charging and more.

If you want a phone that offers something extra, the Z2 Play is a good bet. The mods lift it from run of the mill mid-range device to customisable – if you’re willing to pay.