Web Log: Richer gameplay on the way with launch of Messenger Platform 2.0 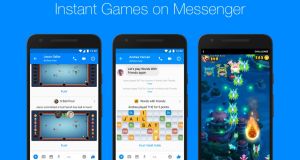 Fans of Zynga’s Words with Friends will be happy to know they can play with pals from inside Messenger as Facebook rolls out Instant Games to allow turn-based gaming and other features like tournaments and leaderboards that can be accessed within its messaging app.

Bots will also play an important role in Instant Games, popping up to remind users to continue a game or explore new features as developers add updates. Messenger users can also expect more and richer gameplay following the announcement at the recent F8 conference of Messenger Platform 2.0, a new suite of tools for developers.

Currently, Instant Games has a wide range of mobile games including retro classics such as Pac-Man, Space Invaders, Snake and Arkanoid.