Both telcos are competing for Government’s national broadband scheme 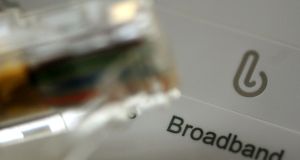 Telecoms firms Siro and Enet, both rivals for the Government’s rural broadband scheme, have announced a partnership agreement that will give Enet customers access to Siro’s expanding fibre network.

Both companies, however, rejected suggestions that the tie-up signalled a possible joint bid for the National Broadband Plan, which is still at the procurement stage.

Under the new arrangement, Enet’s customers will now get access to Siro’s fibre network, which passes 70,000 homes and premises.

The two companies already have an arrangement, which allows Siro use Enet’s network as part of its own build.

The companies said the partnership highlighted the demand for an alternative telecoms network in Ireland and would drive further competition in the broadband market by giving more telecoms companies access to “gigabit connectivity”.

“As we are rolling out a 100 per cent fibre-optic network, we are not constrained by outdated copper technology, which means we can deliver the best broadband experience in Ireland,” he said.

“Together with Enet and our other partners, we will reverse the digital divide in Ireland and future-proof the country’s broadband needs for decades ahead,” he added.

Enet chief executive Conal Henry added: “ With Siro providing the last mile fibre access, Enet will integrate this fibre broadband service with the Metropolitan Area Networks as well as our own national fibre network to offer a full end-to-end offering to all retail service providers.”