Maximum altitude, distance limits and training rules to be included in regulations 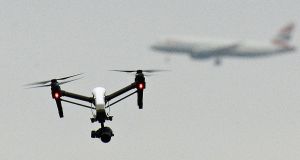 By 2050 the production of drones will account for about 150,000 jobs across the EU. Photograph: John Stillwell/PA Wire

Drones could make up a tenth of all aircraft operating in the European Union within a decade, the EU believes, as it pushes to create safety standards.

By 2050, the European Commission has said, the production of the unmanned flying devices will account for about 150,000 jobs across the continent.

On Tuesday, the European Parliament agreed draft regulations to create EU standards for manufacturers which must now be put before EU member states ministers for approval.

Maximum altitude and distance limits for drone flights will be set, alongside additional safety features, common certification and training rules.

The commission will use the drafts to form specific regulations in consultation with the European Aviation Safety Agency (EASA).

The Irish Aviation Authority (IAA), which has its own drone rules, said detailed work must yet be done. Once accomplished, the EU rules will supersede those of member states.

The draft EU rules are designed to be proportionate to the risk posed by drone flights. Privacy and data protection rights must be safeguarded and drone operators should have sufficient training to fly.

“Higher-risk” operations will require certification. Operators will have to register themselves if their drones can transfer more than 80 joules of kinetic energy “upon impact with a person”.

Other rules will govern noise and emissions, while the EASA will consider what kind of drones should be equipped with features such as altitude limits.

According to a briefing note from the European Parliament, most member states agreed for a need to introduce European-level governance while stakeholders were also consulted.

The European Cockpit Association (ECA), representing pilots, feared the risks posed by low-level drone operators had been “underestimated”. Ireland already operates many of the kinds of laws anticipated by MEPs. The Small Unmanned Aircraft (Drones) and Rockets Order 2015 bans drones near airports, over an assembly of 12 or more people and farther than 300m from the person operating it.

Drones are expected to be a €15 billion business within a decade: “The full potential of drones is still not exploited, as they are not yet integrated in operations among manned aircraft in non-segregated airspace,” the European Parliament said.