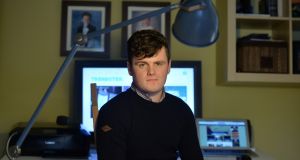 Harry McCann, founder of the Digital Youth Forum, says younger children will continue to go online even if a ban is implemented. Photograph: Alan Betson

Raising the digital age of consent to 16 years will only “push the problem under the carpet” and leave younger children at greater risk of online exploitation, the head of the Digital Youth Council has warned.

Harry McCann, a member of the Government Data Forum, says TDs must focus on developing the digital education and literacy of parents and their children rather than banning young people from going online.

“We felt the best way was not to ban or restrict access but to educate young people on safe and responsibly online use,” the 19-year-old founder of the Digital Youth Forum told The Irish Times, adding that younger children will continue to go online even if a ban is implemented.

“We spoke to various organisations, including the Ombudsman for Children, and they all agreed that education was better than a restriction.”

He said many members of an Oireachtas believe the age of digital consent should be kept at 13.

“Technology is part of our life, this issue is similar to sex education. We teach people how to have safe and responsible sex, we need to do the same with technology. It’s not a fad, it’s part of life.”

Fianna Fáil’s Micheál Martin announced this week that his party would join Sinn Féin and Labour in calling for the age of consent to be raised to 16.

Speaking in a video posted to YouTube, Mr Martin said the age needed to be raised “to protect children and to make sure that data in relation to children cannot be harvested or exploited by companies”.

The digital age of consent was set at 13 last year by the Fine Gael-led Government. The Children’s Rights Alliance, which represents more than 100 organisations involved in children’s welfare, recommended at the time that the limit be set at “the lowest age possible”.

Mr McCann accused Fianna Fáil of calling for the age increase as part of a political strategy to gain support from Sinn Féin in the next general election.

“I think this is just part of a political game, there doesn’t seem to be any basis on this number. There was a lot of criticism for setting it at 13 but now they’ve picked the highest age.

“I understand there’s fears and worries but if there was genuine concern we’d be putting serious work into providing the resources needed to educate people about how to stay safe online.”

Mr McCann says young people cannot be blamed for the decision to share personal information online, saying schools are still failing to provide relevant and tangible advice to school students on how they should use the internet.

“I’m only a year out of school and I can tell you this education was not provided to me. It’s not that young people don’t care about their privacy, they don’t understand the repercussions of what happens when you post a personal photo or information online.”

Additional resources are also need to offer guidance for parents and teachers, he adds.

“Irish society has a very unhealthy relationship with technology and it’s playing a bit part in how people are unsafe online. I believe that by sweeping this problem under the carpet we are failing to prepare young people of one of the greatest threats they face in 21st century Ireland which is the online world. If they go online unprepared, they’re in danger.”