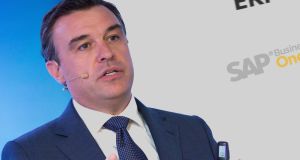 Morgan Browne of Enterpryze: “If you look at the traditional cost of an SAP application then you’re talking about a minimum of €10,000 to €15,000. Now we can deliver a five-user mini-ERP solution for €149 per month.”

Enterpryze, a new company established by Irish IT veteran Morgan Browne to provide a cloud-based enterprise resource planning (ERP) platform for SMEs, is to create 200 jobs in Co Dublin.

Recruitment for the new roles, which include jobs in sales, customer service, technical support and development, is already under way at the firm’s headquarters in Cherrywood. The hiring spree comes amid plans to rapidly expand into global markets over the next four years following the launch of its flagship product earlier this year.

A spin-off company of Milner Browne (formerly IIS Group), Enterpryze is a solution built on SAP Business One – the world’s most popular ERP platform – that streamlines business management processes for companies.

Traditionally, solutions such as Business One have only been available to larger firms due to costs. However, Mr Browne said Enterpryze is intending to “democratise” ERP by making it more widely available.

The platform, which includes several separate management applications covering areas such as sales, purchasing, expenses, deliveries and credit control, is available at an average starting price of €9.95 per user.

“If you look at the traditional cost of an SAP application then you’re talking about a minimum of €10,000 to €15,000 for a company. Now we can deliver a five-user mini-ERP solution for €149 per month,” said Mr Browne.

Mr Browne is an industry veteran and former EY Entrepreneur of the Year finalist, who acquired IIS in 2008, transforming the company from a reseller business into a solutions-focused one using SAP technology as the platform. The company, now rebranded as Milner Browne, employs more than 100 people in Dublin and had revenues of over €10 million last year.

“About three years ago, with the advent of cloud technologies, we spotted a need to create cloud-based solutions powered by SAP technologies for small businesses. After a lot of trial and error we have now come up with Enterpryze, which is essentially a micro-mobile ERP platform that covers off an awful lot of what companies were looking for across multiple departments,” said Mr Browne.

“We can give somebody for the first time access to an ERP system from beginning to end through a mobile device, meaning that someone can effectively run their entire business through a smartphone,” he added.

“As we’re leveraging SAP we’re already localised in 42 countries with the application available in 12 languages,” he said.

“In addition, we see the solution doing particularly well in emerging markets. It has already gotten a lot of traction in Africa in particular, where we have the beginnings of a partnership with a company that wants to take it to market,” he added.

Enterpryze is targeting revenues of about €15 million a year.

“We’ve been looking at the number of users we feel we can tap into within the SAP channel and, based on conversations we’re having with potential partners in Africa, the Middle East and South America, and we’re aiming for about 1 million users within the next four to five years,” said Mr Browne.

1 Who are Ireland’s 17 billionaires?
2 Fianna Fáil may have just pressed the pause button on the property market
3 Are there annual limits on inheritances or gifts to a child?
4 My father in a nursing home wants to gift me his house
5 O’Flynn company ‘mistakenly’ got go-ahead for Birmingham project
Real news has value SUBSCRIBE