In addition, Cormac Ryan has taken up the role of commercial director at the telco 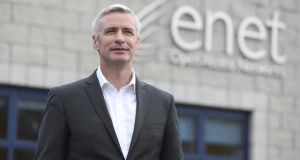 State-backed telco Enet has announced the appointment of John Gilvarry as its new chief operating officer.

In addition, Cormac Ryan has taken up the role of commercial director, and will work alongside John Fitzgerald, procurement and carrier services director.

Mr Gilvarry first joined Enet in December 2019 and previously held the role of chief technology officer (CTO). He has more than 22 years’ experience in the industry. He originally joined Enet from Digicel where he served as Group CTO for Digicel Business.

Prior to this, he held a number of roles in the mobile industry in Ireland and the UK, including O2, Vilicom, Meteor and Hutchison.

“I’m proud to take up this position with Enet at what is a very exciting time for the business,” said Mr Gilvarry.

“As I move into the chief operating officer role, I look forward to working with the commercial, technology and operations teams to drive Enet forward and continue to create value for our customers.”

Enet chief executive Peter McCarthy said: “We’re delighted to be able to make appointments of such high calibre to our senior team.

“The most significant change is the creation of a chief operating officer position and we are excited to appoint John Gilvarry to this role.

“John has made a terrific contribution to the business since joining us, and I am looking forward to working with John in his new role as we continue to drive the growth of Enet.”