Before you complain, stop and think about how expensive and rubbish mobiles used to be 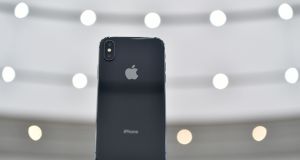 To be precise, the handset will cost $999. Because, you know, if Apple charge one buck less than $1,000, people will be so much less likely to notice that it basically costs a grand, and be more likely to queue for three days in the rain outside their local Apple Store to buy one.

To be frank, Apple missed a trick here. They could have gone for $999.99 and the very same people who would recoil in horror at a thousand bucks would consider the iPhone X a bargain at just a penny less and Apple could have pocketed the extra dosh, which adds up when you are talking about millions of purchases.

Then there’d be a few million more to allow rest in an account offshore until Donald Trump decides to follow the usual US pattern of 1) making a big fuss about the trillions in multinational offshore funds and 2) announcing a special “one-off” arrangement of the type that happens every 10-15 years, like clockwork, which allows said multinationals to “repatriate” that offshore cash at a much lower US corporate tax rate than normal.

Then all the multinationals start saving up again in offshore accounts for the next “one-off’ repatriation, which we can confidently predict we’ll see around 2030.

At any rate, the price of the iPhone X (the X is pronounced “ten” and not like a film rating) seemed to be getting all the initial headlines after the launch on Tuesday in the new Steve Jobs Theater inside Apple’s gleaming doughnut-shaped headquarters in Cupertino.

I am held hostage to my iPhone contacts list, even were I to be run over by a bus and rushed to the emergency room

But let’s be fair here: $1,000 isn’t all that much to pay for a mobile phone. No really, it isn’t. But thanks to Moore’s handy, wallet-friendly Law, how soon we have all forgotten that a grand would have been pretty darn cheap for a mobile handset when the very first one went on sale way way back in 1984.

The iPhone X is a bona fide bargain compared with that very distant relative, the Motorola DynaTAC 8000X (what is it about the letter X that gets mobile marketeers so excited?). That mobile Neanderthal cost – wait for it – $3,995.

Apparently, accounting for inflation in the intervening years, that would be $9,882.39 in 2017 (according to the dollartimes.com calculator). Yes, you could buy nearly 10 (or is that “X”) iPhone Xs for the same price you would have got just one measly 8000X for in 1984.

Plus, you have to consider that all you got for your lousy $4,000 (besides change back for some hair gel for your 1980s Duran Duran-ish quiff) was a hefty beige plastic brick. You could purchase a plastic cover and big belt clip accessory, because there was no way, ever, that your “mobile” phone was going to fit into a briefcase, much less a pocket. Fun fact: this very phone was the behemoth that first earned early mobiles the nickname “brick”, because of its size and weight.

At three-quarters of a kilo in weight, and 25cm in height before you include the long protruding antenna (another 17cm), this was a monstrous multitasking device that could double as a weight for when you felt like some on-the-go arm curls.

And to think that people now consider the original, now 10-year-old iPhone to be “bulky” at little more than a centimetre thick and all of 135g in weight.

And you over there, complaining about your iPhone’s battery life and talk time? Why, the 8000X took 10 hours to fully charge. And then, after all that waiting, your talk time was 30 minutes – or about the amount of time you’d spend on hold these days waiting to discuss your current billing plan with your mobile operator.

That said, the 8000X did have a single line, red-lettered LED display (so HAL) and it held 30 numbers in its memory. You may mock, as that’s just a fraction of the contacts we have in our mobiles nowadays.

But back in 1984, most of us had that many numbers committed to memory (remember memory, as in brain?), as opposed to today, when I don’t even know my mother’s or brothers’ or partner’s numbers off by heart.

Instead, I am held hostage to my iPhone contacts list, even were I to be run over by a bus and rushed to the emergency room (“Next of kin? Just let me check my iPhone, doctor”).

So frankly, you should all stop complaining. Just fork out that grand – or its euro equivalent – and be thankful you can stuff this handset in your front pocket without toppling to one side under the weight, make more than one call on it a day, and recharge it over your lunch– rather than overnight.

Honestly, folks. You clearly all lack the historical insight to view the iPhone X as the costly bargain it really is.