Digitary goes big Down Under with universities deal 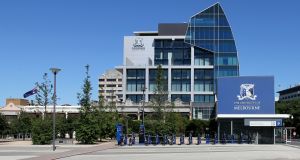 Digitary, a Dublin-headquartered company behind a popular digital documents platform used by third-level institutions across the world, has signed a deal that will see its ‘My eQuals’ system being used in 45 universities in Australia and New Zealand.

The company, which is based in Santry, is teaming up with the New South Wales-based not-for-profit company Higher Ed Services (HES) to rollout the solution across participating universities – including the University of Melbourne – from October onwards.

The deal will mean that students and graduates will be able to access their digital documents and share them with employers, universities and other parties.

In Ireland, Digitary has implemented a similar digital academic records solution for all Institutes of Technology.

The firm has created a software platform used by third-level institutions to issue official documents such as degrees and diplomas to students. Over the past 10 years, more than two million students’ records have been digitally certified through the platform, which is used by more than 80 third-level institutions, including the University of Cambridge and the London School of Economics.

Digitary was initially established to provide security software design and development services for corporate clients such as Intel, Siemens and Baltimore Technologies. It built one of the the world’s first programmes to verify degree certificates and transcripts in 2005.

Digitary said revenue growth had accelerated considerably in the last two years on the back of significant business wins in Ireland, India, China and the US.

“Academic credential fraud is a worldwide problem made possible through the continued use of paper-based proof of qualifications which can be difficult to verify. Fraudulent credentials are easily bought online and are actively being used by some individuals to progress their own careers. Digitary’s technology enables quick and easy verification which can be included as part of the recruitment process, so that these situations are avoided,” said Digitary founder and chief executive Andy Dowling.