Electronic devices, energy, IT and infrastructure to be split into wholly-owned subsidiaries 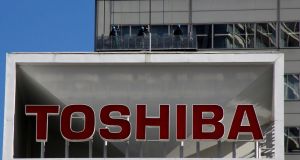 Toshiba said that after the reorganisation, it would focus on “maximising the group’s value and strengthening its governance system”. Photograph: Toru Hanai/Reuters

Toshiba has outlined a shake-up of the conglomerate’s sprawling organisation aimed at insulating core businesses from woes stemming from the crisis at Westinghouse, its US nuclear reactor business.

Last month, Toshiba warned of “substantial doubt” about its ability to continue as a going concern after its finances deteriorated sharply because of the problems at Westinghouse, which filed for Chapter 11 in the US last month.

In an apparent move to ringfence core divisions from their troubled parent, Toshiba said yesterday that it had decided to split off four in-house companies – electronic devices, energy, information technology and infrastructure – into wholly-owned subsidiaries.

Satoshi Tsunakawa, Toshiba’s president, has previously hinted that the reorganisation may be needed in order for the group to continue to obtain a licence from the Japanese government for major infrastructure projects.

With the current arrangements, Toshiba has said that the deep erosion of its shareholder equity would make it difficult for the group to renew its five-year licence for construction projects, which expires at the end of 2017.

The establishment of the four wholly-owned subsidiaries is meant to happen between July and October, and will affect about 20,000 employees who work at the businesses.

Toshiba is not expected to seek to sell the subsidiaries because the group last month identified much of the activities done in these four areas as essential to its turnaround strategy.

But the shake-up will leave the 144-year-old group, once a pillar of the Japanese industrial establishment, a shadow of its former self.

Toshiba is planning to sell its Nand memory chip business, the group’s flagship technology asset, as well as offload much or all of Westinghouse. The Nand business could raise more than $20bn for the group and help repair its balance sheet.

Toshiba said that after the reorganisation, it would focus on “maximising the group’s value and strengthening its governance system”.

The group’s share price has fallen about 50 per cent since December, when it warned of a big writedown on Westinghouse, and the nuclear problems have raised fresh questions about Toshiba’s corporate governance.

Toshiba expects its shareholder equity to fall to a negative ¥620bn at the end of March, reflecting how it could record a record net loss of ¥1tn for 2016-17.

This stems primarily from the troubles at Westinghouse, where Toshiba expects to record a $6.3bn writedown because of cost overruns on two flagship nuclear projects in the US.

Meanwhile, Mitsubishi Heavy Industries is considering investing about ¥40bn in the lossmaking nuclear reactor business of France’s Areva. Mitsubishi Heavy and Areva have co-operated on reactor technology since 2006.