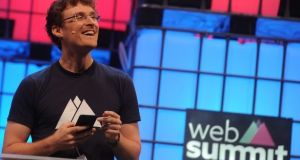 Paddy Cosgrave, chief executive officer of Web Summit: “We’re in very positive dialogue with all the various stakeholders in Ireland.”

Web Summit co-founder and chief executive Paddy Cosgrave hasn’t ruled out a return to Dublin for the tech conference although he described winning back the event as being akin to securing the Rugby World Cup.

Mr Cosgrave was speaking as the company, which relocated its flagship event to Lisbon from Dublin last year, announced plans to take on an additional 40 employees in Ireland.

The Web Summit, which currently employs 150 people, is looking to fill a number of roles at its headquarters in Dartry, including positions in sales and engineering.

The Irish-founded tech conference that started in Ireland in 2009 with less than 400 attendees and grew to about 40,000 by 2015, caused controversy when its upped and left for Portugal last year under a three-year deal.

The summit, which attracted 53,056 attendees from over 166 countries in 2016, is expecting to draw 60,000 people to Lisbon this November. Web Summit also organises several other global technology events, including Collision in the US, Rise in Hong Kong and MoneyConf in Madrid.

Mr Cosgrave said the move to Portugal had enabled Web Summit to expand its offerings to focus on new areas such as policymaking and autotech.

He said that while publicly enthusiastic about the Lisbon event, he had also been extremely nervous about whether it would survive in a new city.

“It thrived in Dublin but we were unsure if it could do the same elsewhere. We were very fortunate that it worked out and we learnt a huge amount from doing it at such a scale,” he told The Irish Times.

Mr Cosgrave added that Dublin is still “a very important part of the Web Summit DNA” with its HQ remaining here. He said that contrary to the position he held a few years ago, he was impressed with the quality of talent available locally.

“Three or four years ago I felt it was a very competitive marketplace and that the multinationals were hoovering up all the talent but it is a two-way street and most of the people we’ve hired to join our sales organisation over the last 12 months have come out of LinkedIn, Salesforce, Oracle, Facebook and so on. These are people who have had five years training in world-class organisations and who then get the itch to maybe try something different and we’re benefiting from that,” he said.

“Web Summit has become the largest technology conference in the world. The only two remaining events are CES and Mobile World Congress, which deal with particular niches. Web Summit became what it is, largely because of Dublin, a city that is an amazing place to run events,” he said.

“We are always talking to different cities for all our events and previously moved Collision from Las Vegas to New Orleans and MoneyConf from Belfast to Madrid. These are all very mobile events, much like major sporting events such as the Rugby World Cup are. We’re in very positive dialogue with all the various stakeholders in Ireland and I expect those relationships to go from strength to strength in the coming years. We’re absolutely looking at something at some point.”