Unosquare intends to establish engineering centre in Belfast for US, UK and Europe 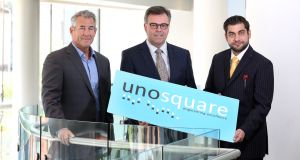 An American software development company is to locate its first engineering centre outside of the US and Mexico in Northern Ireland in an investment expected to create 100 jobs by 2019.

The Portland-headquartered software development company Unosquare intends to establish a new engineering centre in Belfast which will service its existing US clients and help drive its expansion ambitions in UK and European markets.

Unosquare clients are concentrated in the healthcare and fintech sectors .

Mike Barrett, chief executive of the US software company, was in Belfast on Tuesday to announce details of the investment boost for the city and he explained why there were a number of reasons that made the North an attractive proposition.

“We were looking for a location that not only provided skilled software engineers, but also the right business climate to enable us to get our operation up and running quickly. With such a strong IT sector, Northern Ireland was able to offer that,” Mr Barrett said.

Unosquare has also highlighted that the financial and business support it received from Invest NI was also a “crucial factor” in its decision to locate in the North.

Unosquare’s positive endorsement of Northern Ireland is a welcome ray of light for Invest NI which is continuing to promote the proposed introduction next April of a lower rate of corporation tax. But the timing for the introduction of the rate has been thrown into some doubt because of the current political stalemate.

Normally the North’s political leaders are at the forefront of any positive, job-generating, investment announcements – particularly when it is a first-time investor to Northern Ireland like Unosquare.

They were noticeably missing from the publicity photocalls on Tuesday as talks continue to break the political deadlock at Stormont.

But Alastair Hamilton, Invest Northern Ireland’s chief executive, was keen to stress how significant the decision was by Unosquare to choose Belfast over any number of other locations that the North had to compete against.

“The company uses innovative technology which will not only enhance the technical capability within Northern Ireland, contributing towards the expansion of our ICT sector, but will also give experienced software developers new skills and exposure to new technology,” he added.