Company claims SMEs could make savings of up to €20,000 through using its platform 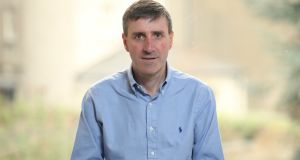 Paul Byrne was appointed as CurrencyFair’s head late last year as the company beefed up its management team.

Irish-based fintech firm CurrencyFair, which recently raised €8 million to fund expansion, has revamped its peer-to-peer currency platform to enable small and medium-sized businesses to use the service.

CurrencyFair claims SMEs could make savings of up to €20,000 through using its platform.

The company, which was founded in 2009 by Brett Meyers, provides a money- exchange platform that aims to help users avoid large charges for exchanging foreign currency. Its average fee is 0.38 per cent, compared with 2-5 per cent for other services.

Although much of CurrencyFair’s income still derives from individual users, the company has been increasingly targeting business users of late. At the Web Summit in Lisbon last November, the fintech firm confirmed it had raised €8 million in funding as it seeks to expand its customer base.

The company, which had already raised €18 million in two funding rounds, is also set to open an office in London by the end of the year as part of a plan to grow market share in the UK.

CurrencyFair said that having already moved more than €4.7 billion and saved more than €166 million for its consumers, it had started seeing a lot of start-ups and SMEs migrating to its services from traditional banks and remittance providers.

“With businesses increasingly trading internationally and operating at a quicker pace, there’s no reason why they should use currency-exchange services that aren’t as concerned about efficiency, cost and delivering for their customers as they are,” said chief executive Paul Byrne.

A former Trintech chief executive who has scaled three successful software businesses, Mr Byrne was appointed as CurrencyFair’s head late last year as the company beefed up its management team. As part of that move, former Fenergo leader Ruth Fletcher took over as chief financial officer of the firm with Mr Meyers becoming chief strategy officer in a move that leaves him free to concentrate on the company’s future direction.

CurrencyFair, which in early 2014 became the first platform in the world to break the $1 billion (€916 million) barrier in money-matching transfers, last year also brought in Richard Rose, the former head of online domestic-appliance retailer AO World, as chairman.