Digicom to add 30 staff as it expands in Dublin 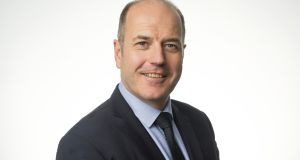 Digicom managing director Greg Clarke said the firm may also look to open an office in London, as it seeks further work with Dublin-located multinationals at their bases abroad. Photograph: Conor McCabe Photography

Digicom, an office technology and audiovisual company run by former Dublin Chamber of Commerce president Greg Clarke, is expanding in the capital on the back of a buoyant office market fuelled by incoming multinationals.

Digicom, which currently employs more than 40 staff in Ballymount, plans to increase this up to to 70 and Mr Clarke said it may also look to open an office in London, as it seeks further work with Dublin-located multinationals at their bases abroad.

Mr Clarke said it is forecasting growth of 15 per cent next year, on the back of 20 per cent this year and 35 per cent growth in 2016. He pointed to a spike in demand for high-tech office systems from British-based companies opening offices in Ireland post-Brexit.

Mr Clarke also said that companies hoping to recruit and retain millennials were investing in upgrades of their office communications systems to match the expectations of their increasingly tech-savvy staff.

“Around 2013 or 2014, we noticed that companies were really increasing their budgets for their audiovisual technology,” he said.

“The millennial generation that is entering the workplace, and increasingly maturing into decision-making roles, want their technology at work to be the latest available and seamlessly integrate into their work and personal lives. For many employers, the technology in their office is as important an incentive as anything else – it is mission critical.”

Digicom will showcase the “office of the future” at a public and client event in the CHQ venue in Dublin’s docklands on Thursday.

The company is hiring for a variety of roles including project managers, technical engineers, sales, programmers, computer-aided design drawers and trainees. Mr Clarke said he has encountered a particular difficulty finding staff for construction-related roles, such as project managers.

Digicom’s recent projects include a major installation for multinational medical devices company, Teleflex, in Athlone. Its client list also includes Mazars, IBEC, aircraft lessor SMBC and Ardagh Glass. It has also recently worked with Zurich at its office on the Isle of Man and Bank of Ireland in London and Bristol.