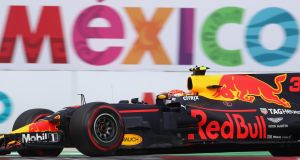 Red Bull at the Formula 1 grand prix in Mexico.

First Derivatives, the Newry headquartered software and consultancy group, is hoping to give the Red Bull Racing team extra “wings” after signing a deal to supply its Kx technology to the Formula 1 team.

The Newry company, which is dual listed on the London and Irish stock exchanges, has been chosen by Red Bull to provide them with its Kx technology - an ultra-high performance technology platform that processes real-time steaming and historical data.

The racing team plan to use to the technology to glean information about the performance of their Formula 1 vehicles.

First Derivatives, which last week was named the tech company of the year in the UK Tech Awards 2017, said initially its Kx technology will be deployed to analyse wind tunnel data – this information could then be used to help develop faster and more competitive F1 cars.

According to Brian Conlon, the Newry group’s chief executive, First Derivatives shares some common characteristics with the racing team which he believes is a good omen for the future.

“Both companies are associated with power, speed, precision engineering and innovation. Over the years F1 has proven itself as an ideal testing ground for disruptive technologies and we look forward to bringing the power of Kx to bear in high-value complementary markets,” Mr Conlon said.

According the Newry group an F1 car could have more than 100 sensors and its technology will be used to “capture, integrate and analyse” all of the data from these sensors to deliver crucial information to the Red Bull Racing team.

It believes that the insights gained from the use of its technology plus the corresponding team and driver response has the potential to make a difference to both the ultimate race result and the safety aspect of cars that can be travelling at up to 300km per hour.