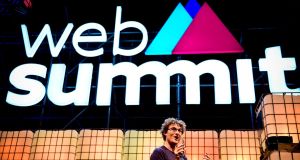 Artificial intelligence (AI) may “be the best or worst thing to ever happen to humanity”, scientist Stephen Hawking told an audience of 60,000 techies at the Web Summit on Monday.

He was speaking as the tech conference, which began life in Dublin but relocated to Lisbon last year, returning to the Portuguese capital.

Mr Hawking warned of the need to prepare for potential risks from the rise of artificial intelligence.

“I am an optimist and I believe that we can create AI for the good of the world,” he said. “That is can work in harmony with us. We simply need to be aware of the dangers, identify them, employ the best possible practice and management, and prepare for the consequences well in advance.”

Other opening night speakers also struck a cautious note warning that technology brings as many problems as it does solutions.

“We are at the kind of inflection point that comes around, not once in a lifetime but once in several lifetimes,”said Web Summit co-founder and chief executive Paddy Cosgrave. “Tech is turning upside down everything we thought certain about work, society, politics and life on earth itself.”

Separately, European Competition Commissioner Margrethe Vestager, who led the recent tax case against Apple and Ireland, said it was time for people to take democracy back from the tech giants. “Society is about people, not technology,” she said.

With a newly-introduced invitation and ticketing system at work, there was no repeat of the scenes at last year’s opening night when some ticket-holders were forced to watch events unfold on a screen outside the FIL and Altice Arena (formerly known as MEO arena). Perhaps just as importantly for attendees, the wi-fi worked perfectly.

This year’s Web Summit sold out on Friday with those snapping up the last tickets paying up to €1,500 each. Executive attendee tickets priced at €4,995 had also all been sold.

The first Web Summit in 2010 attracted fewer than 400 people, with four investors in attendance. Close to 60,000 techies, including 1,500 investors, are attending this year’s event.