Facebook to expand in Ireland, US tax plans and Irish tax revenues on target 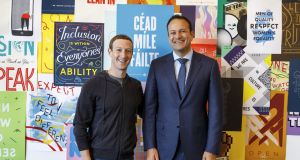 The Taoiseach’s networking in Silicon Valley seems to be paying dividends: Facebook has confirmed it plans to create hundreds of new jobs in Ireland next year as it expands its operations here in 2018. Suzanne Lynch reports on Leo Vardkar’s meeting with Mark Zuckerberg, amongst others, in the tech heartland.

All eyes were already on the US last night as the Trump administration unveiled its new tax plans, aiming to cut US corporation tax from 35 per cent to 20 per cent. However, the devil is in the detail and, according to Cliff Taylor, tax proposals emanating from Brussels appear to carry much more danger for us than those coming from Washington.

Nevertheless the US plans will be studied in detail in Silicon Valley, where Apple last night reported stronger-than-expected fourth quarter figures. A bullish outlook from the tech giant, as its new iPhone X went on sale, sent its share price to an all-time high.

Back home, the latest exchequer returns show the Government’s tax revenues are on target for the first time this year. Eoin Burke-Kennedy assesses what it means for the public purse.

Long-time finance union chief, Larry Broderick, is to retire after three decades. He tells Joe Brennan why the State should maintain a bonus cap on the bailed-out banks.

In Business Agenda, Mark Paul looks inside Ireland’s boardrooms and identifies the 10 best connected company directors. Analysing 51 firms here, his findings beg the question: is our non-executive gene pool is too shallow?