‘Strategic infrastructure’ quick-step would not have saved Apple’s project 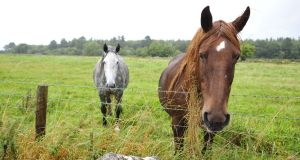 A file photo showing horses at the site near Athenry in Galway where Apple sought permission for a data centre. Photograph: Aidan Crawley

The Government’s response to the disaster that is the Apple/Athenry saga is to propose that, in future, data centres will be considered “strategic infrastructure” under planning laws. This will allow companies building data centres to skip the local authority stage, and proceed straight to An Bord Pleanála.

Even if such a regime had been in place when Apple first sought planning, it would have made very little difference. It wasn’t a delay by Galway County Council that gave Apple the hump and jeopardised the project.

It was the glacially-slow judicial review in the High Court that did it for Athenry. The Government’s “strategic infrastructure” wheeze does nothing to address this.

Apple applied to the local authority in Galway in April 2015 for planning permission. It received the go-ahead in August of that year. Even as a quicker “strategic infrastructure” application, it would, at most, have shaved four months off the tortuous two-and-a-half year process.

Within weeks of the original permission from Galway, the matter was appealed to ABP, which gave permission to Apple in August 2016.

It was only from here that the application got bogged down, stalling in the quicksand of a judicial review that took more than a year, even though it was supposedly “fast-tracked” through the commercial court. The judicial review was originally supposed to take six months, but it kept getting adjourned because of a shortage of judges to deal with the case.

So far this year, 33 ABP decisions have gone to judicial review, several taken by the same individuals, who seem to view the High Court as a routine extension of the planning system. If the Government really wants to fast-track data centres, it must find a way of discouraging lengthy judicial reviews.

In the meantime, the appellants in the judicial review case appear, by dint of the delay, to have won the outcome they sought – for Apple to shelve the plan. They lost, but still won. That does not sit well in the context of natural justice.