Deal would make Broadcom third-largest chipmaker behind Intel and Samsung 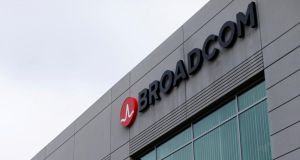 Broadcom made an offer of $70 a share in cash and stock for Qualcomm, a 28 per cent premium for the chipmaker as of the stock’s closing price on November 2nd.

Chipmaker Broadcom Ltd made an unsolicited $103 billion bid for Qualcomm Inc on Monday, setting the stage for a major takeover battle as it looks to dominate the fast-growing market for semiconductors used in mobile phones.

Qualcomm said it would review the proposal.

The company is inclined to reject the bid as too low and fraught with risk that regulators would reject it or take too long to approve it, people familiar with the matter said.

A Broadcom-Qualcomm deal would create a dominant company in the market for supplying chips used in the 1.5 billion or so smartphones expected to be sold around the world this year. It would raise the stakes for Intel, which has been diversifying from its stronghold in computers into smartphone technology by supplying modem chips to Apple.

Qualcomm shareholders would get $60 in cash and $10 per share in Broadcom shares in a deal. Including debt, Broadcom’s bid values the transaction at $130 billion.

GBH Insight analyst Daniel Ives said bullish investors were hoping for $75 to $80 per share. “Now it’s a game of high-stakes poker for both sides,” he said.

Shares of Qualcomm, whose chips allow phones to connect to wireless data networks, traded above $70 as recently as December 2016 and topped $80 in 2014.

On Monday, Qualcomm’s shares were up 3 per cent at $63.71 in morning trading, suggesting that investors were sceptical a deal would happen.

Broadcom shares were flat after hitting a record high of $281.80.

Any deal struck between the two companies would face intense regulatory scrutiny. A big hurdle would be getting regulatory approval in China, on which both Qualcomm and Broadcom rely on heavily to make money.

China is set to scrutinise any deal closely after US regulators blocked a flurry of chip deals by Chinese firms due to security concerns, thwarting the Asian country’s attempt to become self-reliant in chip manufacturing.

Broadcom could spin out Qualcomm’s licensing arm, QTL, to get regulatory approval and funding for the deal, Nomura Instinet analyst Romit Shah said.

“We think QTL could fetch $25 billion in a sale to a private equity firm or multinational telecommunications company,” Mr Shah said. – Reuters