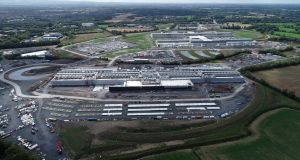 Facebook’s new Data Centre in Clonee Co Meath. Dozens of centres have opened in recent years, bringing the total to 54, with a combined power capacity of 642MW. Another 10 centres are under construction

It operates 24 hours a day from the business park, sited on a former orchard, and the data joins a digital torrent in an underground fibre ring network that sweeps around Dublin and connects to undersea cables – the physical backbones of the digital world.

It is not just for Ireland. This is also how the UK and continental Europe accesses a lot of email, social media, online shopping, Netflix and other internet services. “Everything with the word smart in front of it has a data centre behind it,” said Ben Bryan, Digital Realty’s technical operations manager in Dublin.

But there is a catch. The surge in Irish data processing will require significant new energy infrastructure and increase emissions, complicating Ireland’s response to the climate crisis.

The cloud can create carbon: it is estimated that when the music video Despacito reached 5 billion streamed YouTube views in 2018, the energy consumption was equivalent to powering 40,000 US homes a year (it has now exceeded 6.5 billion views).

It is already Europe’s data centre capital, with Amazon, Google and Microsoft siting operations there. Dozens of centres have opened in recent years, bringing the total to 54, with a combined power capacity of 642MW. Once a leading exporter of floppy discs and CD-Roms, Ireland has successfully transitioned to the big data era.

It is just the beginning. Another 10 centres are under construction, including a €1 billion Amazon hub in Mulhuddart, west Dublin, that together will add 202MW. Another 31 centres have planning permission, which would add 629MW. There has been one setback: planning approval delays prompted Apple to scrap a planned €850 million centre last year.

“The data centre industry is growing so fast it’s hard to fathom,” said Patrick Bresnihan, a geography professor at Maynooth University in Ireland. “But somehow the tech companies get far less attention than aviation or fossil fuel companies.”

Ireland faces a dilemma. The expanding web of data centres is part of a strategy to anchor tech companies that drive economic growth. They have been designated as “critical infrastructure”, facilitating planning approval. “Data centre presence in Ireland raises our visibility internationally as a technology-rich, innovative economy,” said a spokesperson for the Department of Business, Enterprise and Innovation.

But the boom will exact a price. Ireland is one of the EU’s worst carbon emission offenders and faces fines of more than €250 million for missing 2020 targets on reducing greenhouse gas emissions. Missing later targets will trigger steeper fines.

A report by the Irish Academy of Engineering has estimated data centre expansion will require almost €9 billion in new energy infrastructure and add at least 1.5 million tonnes to Ireland’s carbon emissions by 2030 - up 13 per cent spike on current electricity sector emissions.

Ireland’s data centres have a low profile. They tend to operate from anonymous-looking business parks with high-security perimeter fences and intruder detection alarms. A Google centre has colourful murals but the rest are grey and nondescript, with discreet signage.

Digital Realty, whose headquarters is in San Francisco, has a relatively small centre in Profile Park, part of a cluster in west Dublin. Its two data halls are powered by 9MW, a fraction of some neighbours but enough to require an electricity substation.

It powers the servers and fans which during winter suck in cool air from outside. If the power - and cooling - stopped the machines would swiftly overheat, said Bryan. That has never happened but just in case there are backup diesel generators on the roof.

The electricity came from 100 per cent renewable sources, said Valerie Walsh, a company vice-president. “There is a huge amount of thought to make sure we’re sustainable and do the right thing.”

Google and Amazon representatives also said their Irish data centres were energy efficient and entirely supplied by – or soon would be – renewable energy. Earlier this year Amazon Web Services announced backing for a 91.2MW windfarm in Donegal and a 23.2MW windfarm in Cork.

Such deals could act as a catalyst for renewable energy investment, said the DoBEI, citing a 2018 government report.

Asked about the estimated 1.5 million tonnes of carbon emissions, it replied: “The department is not in a position to comment on the accuracy or otherwise of the estimates of the IAE study, which it is not a party to.”

Bresnihan, the academic, said Ireland’s dependence on big tech companies should not obscure their environmental cost. “If they left Ireland would be in a pretty bad situation but there’s only so long you can put off these contradictions.” – Guardian News and Media 2020

1 Google tells workers to return to country where they are employed
2 Subway bread too sweet for the Irish tax authorities
3 Pension problems: Workers ‘leaving free money on the table’
4 Recurring Covid restrictions will kill off many viable businesses
5 Citroën’s Irish distributor to relinquish contract
Real news has value SUBSCRIBE