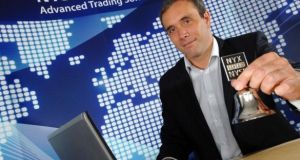 Options, a technology company led by Northern Irish entrepreneur Danny Moore, has secured an investment believed to be worth more than $100 million (€90 million) from Boston-based private equity firm Abry Partners.

The company, which was originally founded in 1993 as a hedge fund technology services provider, now offers a range of IT services to organisations in the financial services sector.

No financial details of the deal have been disclosed but industry sources say it is worth considerably more than the $100 million investment Options received from New York-based private equity firm Bregal Sagemount in late 2017.

Options, which announced plans to create 100 new jobs in Belfast in late 2018, said it intends to use the funding to “significantly accelerate” its growth strategy, pursue strategic M&A targets and invest further in the company’s technology platform.

More than 200 companies globally currently use Options’ IT platform and it has close to 300 employees globally, of which half are in Belfast. It also has offices across the US, Dublin, London, Hong Kong, Singapore, Toronto, Geneva and Auckland.

In addition to his various executive roles in the tech sector, Mr Moore is also an Oscar winner, having won the gong in 2012 for his role as executive producer on the Shore, a short film directed by Terry George and starring Ciarán Hinds.

“We are thrilled to announce Abry’s investment in Options. They are a firm with a proven track record in partnering with growth firms and propelling them to the next level. Even more crucially, they are seasoned operators in the financial services and managed IT space and understand the exciting opportunities within reach of firms offering cloud services to the capital markets sector,” said Mr Moore.

Abry, which was established in Boston in 1989, manages over $5 billion of capital across its active fund. The firm has completed over $82 billion of leveraged transactions and other private equity or preferred equity placements since it was first founded.

Late last year it sold insurance broker Hilb Group to Carlyle in a deal that valued the company at more than $1billion.