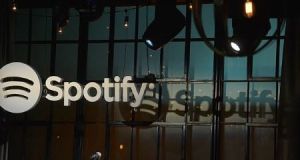 Spotify did not answer a Reuters question on how much revenue the company generates from political ads. File photograph: Getty

Spotify Technology SA said on Friday it would pause selling political advertisements on its music streaming platform in early 2020.

The world’s most popular paid music streaming service, with nearly 141 million users tuning into its ad-supported platform in October, said the pause would also extend to Spotify original and exclusive podcasts.

The move, which was first reported by Ad Age, comes as campaigns for the US presidential election in November 2020 heat up.

Online platforms including Facebook Inc and Alphabet Inc’s Google are under growing pressure to police misinformation on their platforms and stop carrying political ads that contain false or misleading claims.

“At this point in time, we do not yet have the necessary level of robustness in our processes, systems and tools to responsibly validate and review this content,” a Spotify spokeswoman said in a statement to Reuters.

“We will reassess this decision as we continue to evolve our capabilities.”

Spotify, which was only accepting political advertising in the United States, did not answer a Reuters question on how much revenue the company generates from political ads.

“Spotify wasn’t a widely used online advertising platform for campaigns before,” said Eric Wilson, a Republican digital strategist. “But as other online platforms restricted their political ad inventory, advertisers were on the hunt for new options.”

The new policy will cover political groups such as candidates for office, elected and appointed officials, political parties, political action committees (PACs) and SuperPACS, as well as content that advocates for or against those entities. Spotify will also not sell ads that advocate for legislative and judicial outcomes.

The move only applies to Spotify’s ad sales, not advertisements embedded in third-party content, though those will still be subject to Spotify’s broader content policies. – Reuters

1 Bogus notion that supply will cure our housing woes
2 Life as a Facebook moderator: ‘People are awful. This is what my job has taught me’
3 Bank leaked my loan request to family who tried to rip me off
4 Irish companies restrict travel over coronavirus fears
5 Suspicions rife as key Brexit trade talks begin in Brussels
Real news has value SUBSCRIBE